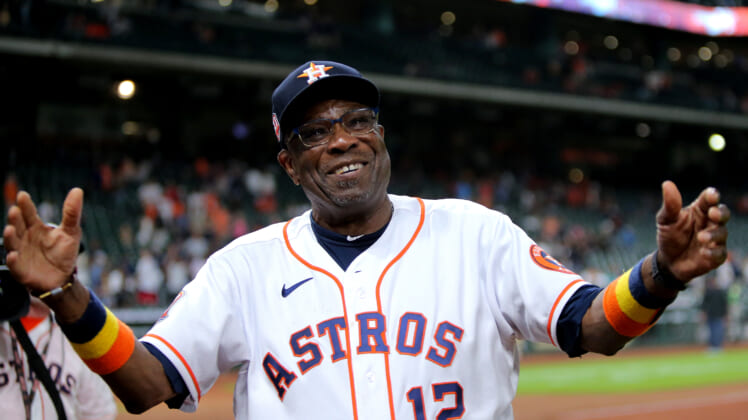 Legendary manager Dusty Baker earned his first win in that role with the San Francisco Giants back on April 9, 1993, against the St. Louis Cardinals.

Fast forward nearly 30 years, and Baker finds himself in MLB history. By virtue of the Astros’ 4-0 shutout victory over the Seattle Mariners on Tuesday, Baker earned his 2,000th career win. He’s now the 12th manager and first African-American manager in MLB history to reach that plateau.

During his absolutely brilliant 25-year career, Dusty Baker has managed the Giants, Chicago Cubs, Cincinnati Reds, Washington Nationals and these Houston Astros. He’s posted a 2,000-1,745 record with two pennants during that span.

“You can’t look back because you have work to do going forward,” Baker said before Monday night’s game, via the Associated Press. “And you can’t gloat about what you’ve done until after your career is over with. Then when your career is over with, then you assess the entire situation. But while you’re in it, you don’t have time to do that.”

Dusty Baker and MLB managers with the most wins

Baker is the only manager within the top 12 that has not won a World Series. He joined the Astros ahead of the 2020 season after the entire sign-stealing scandal and has led the team to a playoff appearance in each of his first two seasons. Last year saw Houston fall to the Atlanta Braves in the World Series.

Prior to his managerial career, Dusty Baker played from 1968-1986. He earned two All-Star appearances while hitting 242 homers in parts of 19 seasons on the diamond. Talk about an absolutely legendary career.