The UFC closes out its 2021 major event schedule with a bang on Saturday night.

UFC 269 is co-headlined by what looks to be a firecracker of a lightweight title fight and the return of the best women’s pound-for-pound mixed martial artist of all-time.

In the headliner of the pay-per-view event at T-Mobile Arena in Las Vegas, UFC lightweight champion Charles Oliveira of Brazil will put his belt on the line for the first time when he meets Louisiana’s Dustin Poirier.

Poirier is the -145 favorite at DraftKings, where he is being backed by 61 percent of the money wagered on the fight while 56 percent of the total bets have been placed on Oliveira. 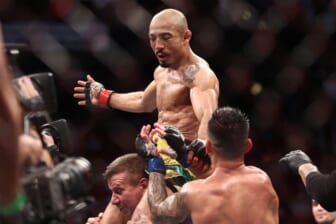 Nunes is the overwhelming favorite at -900 at DraftKings, but that hasn’t scared the public off her. The lopsided action has seen 73 percent of the money and 94 percent of the bets backing Nunes.

It’s borderline astonishing that Oilveira (31-8) and Poirier (28-6), two of the longest-standing, all-action fighters on the UFC roster, have not crossed paths before this event. Oliveira holds the UFC record for most victories via finish at 17. He set the mark when he defeated Michael Chandler via second-round TKO at UFC 262 to claim the vacant title and earn his ninth straight win.

Poirier, meanwhile, has won three straight fights and nine of 10. He holds the UFC lightweight division record for most knockouts with eight, including two of Conor McGregor this year alone.

In the semifinal, Nunes (21-4) will look to add to an unprecedented run of excellence.

Nunes also holds the UFC featherweight title. And while she’s one of four competitors to simultaneously hold two belts in UFC history, she’s the only one to defend both after winning the second belt.

In this case, she puts on the line her 135-pound crown, which she has held since July 2016, making her one of just five fighters in UFC history with an individual reign that surpassed the five-year mark.

Nunes will put her overall 12-fight win streak on the line against Pena (10-4), who submitted former Olympic wrestling silver medalist Sara McMann last time out to earn the spot.