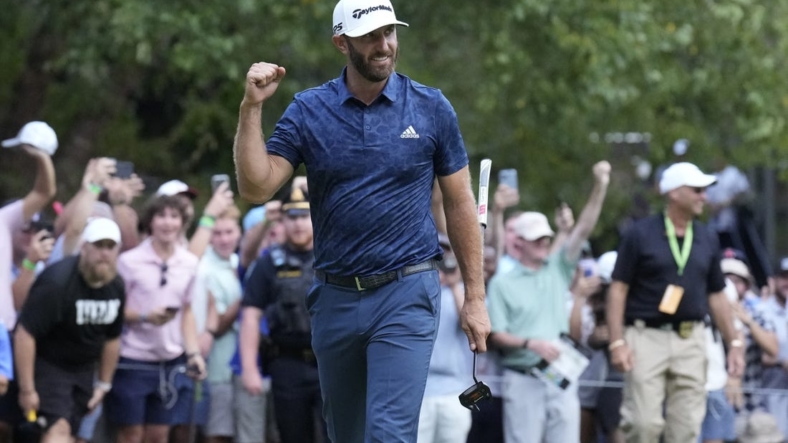 Dustin Johnson rammed home a 35-foot eagle putt on the first playoff hole to win the LIV Golf Invitational Boston on Sunday in a playoff over India’s Anirban Lahiri and Chile’s Joaquin Niemann.

Johnson reached the green in two at the par-5 18th hole at The International in Bolton, Mass. His uphill putt had plenty of pace, and it bounced off the back of the cup before dropping.

One of the biggest names in golf to make the initial jump from the PGA Tour to LIV Golf in June, Johnson won the Saudi-funded upstart tour’s fourth event — claiming his first win anywhere since February 2021.

“It’s a great victory,” said Johnson, a two-time major winner and former world No. 1. “Obviously we’ve got a great field, a lot of great players. Yeah, it’s up there for sure.”

Johnson shot a 5-under 65 in his final round, with six birdies and just one bogey. He finished the three-round event at 15-under 195.

He was joined there by Lahiri (64) and Niemann (66), each of whom were making their LIV debut. The trio finished one shot better than first-timer Cameron Smith of Australia, who carded a 63 Sunday, and Englishman Lee Westwood, who had the round of the day with an 8-under 62 that featured 10 birdies.

Second-round leader Talor Gooch only managed a 69 and finished sixth at 13 under.

It also marked the third straight team victory for Johnson’s team, 4 Aces. Johnson, Gooch, Pat Perez (7 under) and Patrick Reed (3 under) combined to go 32 under at the event. That was two better than Bryson DeChambeau’s Crushers, which had Lahiri, Paul Casey of England and Charles Howell III.

“I think that’s what’s so impressive about our team is it seems like every week, we seem to close. It’s not just how we start,” Reed said.

The series returns in two weeks at Rich Harvest Farms outside Chicago.