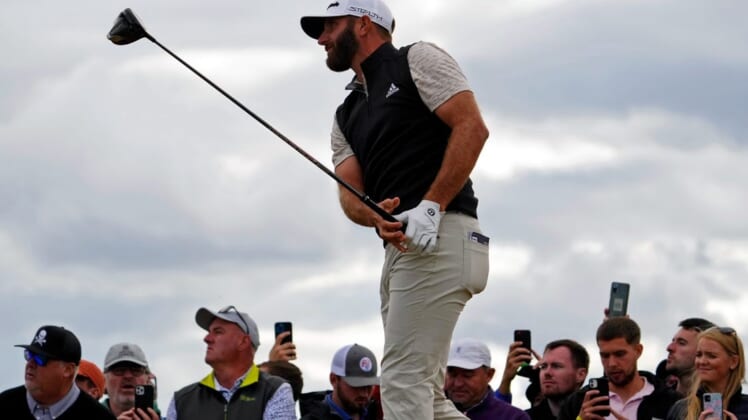 For the first time, a member of the LIV Golf Invitational Series took the lead at a major championship on Friday.

Dustin Johnson sank a 13-foot birdie putt at the 18th hole to move to 9 under par and set the clubhouse lead in the second round of The Open Championship at St. Andrews in Scotland.

Johnson’s number stood throughout the morning, until Australian Cameron Smith birdied five of his first nine holes to eke ahead at 10 under. First-round leader Cameron Young joined Johnson at 9 under early in his afternoon round.

Calm conditions following some overnight rain at the Old Course created much easier scoring for the morning groups, which had struggled to go low during Thursday’s afternoon wave.

Johnson recovered from a three-putt bogey on the first hole to make six birdies and shoot a 5-under 67. When he walked off the course, he predicted that his advantage wouldn’t stand for long.

“I don’t think I’ll be in the lead by the end of the day,” Johnson said on the TV broadcast. “There’s not a whole lot of wind. There’s a lot of guys behind me that shot some good scores yesterday. But I still like my position going into the weekend, no matter where I’m sitting.”

Australian Adam Scott posted the round of the day thus far with a bogey-free, 7-under 65 that vaulted him into a tie for sixth at 7 under. He was tied with Patrick Cantlay (67), Sahith Theegala (68) and LIV golfer Talor Gooch (69).

Spaniard Sergio Garcia, one of the first notable names to defect from the PGA Tour to LIV, used an eagle 2 at the par-4 ninth to shoot a 6-under 66. That brought him to 3 under for the week, inside the projected cut line.

The top 70 golfers and ties will make the cut at St. Andrews. As of 11 a.m. ET, the projected cut line was even par.

Tiger Woods won’t be playing the weekend. Woods shot a 3-over 75 Friday to drop to 9 over for the championship and will miss the cut at The Open for only the fourth time in his career. He made just one birdie Friday and lipped out a birdie try for a would-be memorable moment at the 18th green.

Scheffler posted his second straight 68 thanks in part to three consecutive birdies at Nos. 10-12. The Masters champion is vying to join Woods and Nick Faldo as the only men to win at Augusta National and St. Andrews in the same year.

“I was not swinging well at all my first six or seven holes, but I stayed out of trouble and made some good pars,” Scheffler said. “After that, once we made the turn, I made a good swing on 9 and after that I hit most of my shots pretty close to how I wanted to.”

Hatton’s bogey-free 66 came with four birdies in a five-hole stretch, at the par-4 sixth, seventh, ninth and 10th holes. Scott did him one better, with his round of 65 featuring a 41-foot birdie putt at the par-3 11th.

Young led after a first-round 64 and went off in the afternoon wave Friday, as did Northern Ireland’s Rory McIlroy, who was in second at 6 under after the first round. Smith was tied for third after Day 1.