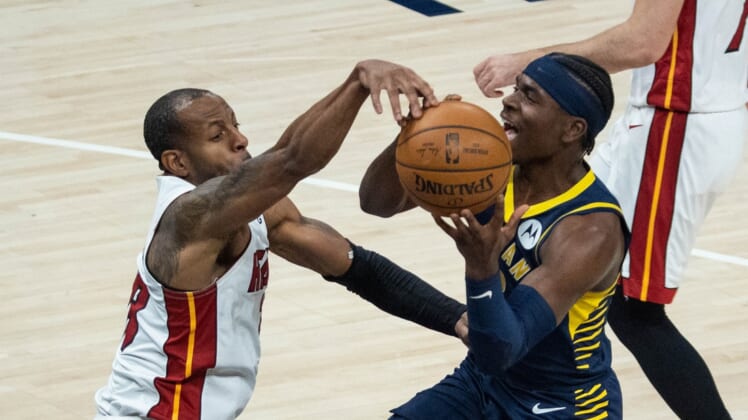 Duncan Robinson scored a game-high 20 points and grabbed eight rebounds as the Miami Heat defeated the Indiana Pacers 91-87 on Wednesday night at Indianapolis.

Indiana, which has lost two straight games, was led by Myles Turner, who had 15 points, six rebounds and three blocks despite playing much of the second half with five fouls.

Pacers star Domantas Sabonis had a game-high 14 rebounds but was held to nine points. Indiana also got 14 points each from Caris Levert and Doug McDermott. LeVert added a game-high four steals.

Indiana played without Jeremy Lamb, who sustained a toe injury.

Miami was without Kendrick Nunn (right-ankle injury) and Victor Oladipo (illness). Oladipo, acquired from the Houston Rockets last week, is expected to make his Heat debut on Thursday, back at home, against the Golden State Warriors.

There were six tie scores and four lead changes in a first quarter that ended with Indiana on top 28-21.

Indiana led by as many as 14 points in the second quarter. But Miami closed the quarter on an 13-1 run, and Indiana went into halftime with a narrow 45-43 lead.

The Pacers led for the entire third quarter, going up by as many as 15 points. But Miami closed the quarter with another run, trailing 67-65 heading into the fourth.

Midway through the fourth, Miami regained the lead for the first time since the first quarter, surging on top 79-78 on a pair of Robinson 3-pointers.