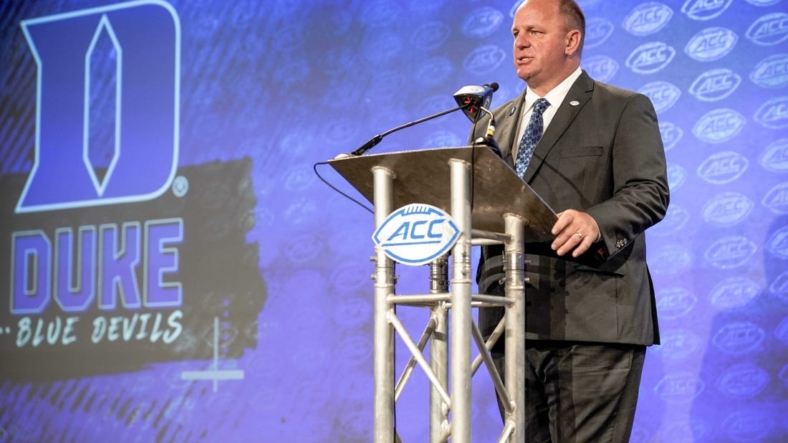 A first-year coach will collect a victory in the season opener when Temple visits Duke on Friday night in Durham, N.C.

A significant difference is that Temple is accustomed to playing under new leadership as Stan Drayton is the fourth coach to begin a season with the Owls in a seven-year span.

Duke had more stability, but a recent slide invited a switch. Mike Elko was hired to try to reverse the trend.

“As of right now we’re taking the right steps,” Blue Devils defensive back Jaylen Stinson said. “We’re not where we want to be but we’re heading in the right route. You can tell everyone is bought in and we’re moving in the right direction toward the season opener.”

Drayton and Elko are both first-time head coaches.

It might be difficult to tell which team is further along in the reconstruction project based on one game.

“We’ve kind of put these guys in situations where we’ve had to kind of challenge their routine,” Drayton said. “I think our guys are getting a much better sense of what’s being asked of them schematically.”

Drayton, who had been associate head coach at Texas, knows the first impression of the season will be important.

“We really have to prepare ourselves to have success on that Friday,” he said.

Both teams are coming off 3-9 seasons. Duke carries an eight-game losing streak into the season. With one exception, the Blue Devils lost each of those games in the skid by at least 25 points.

Elko arrived from Texas A&M, where he was a defensive coordinator after holding a similar role at Wake Forest. He replaces long-time coach David Cutcliffe.

“Expectations are always the same to me,” Elko said. “The expectation is that we go out and lay it on the line for Duke every week. … I think you focus on what you can control now, what you can improve now.”

The Blue Devils had major issues on defense last year, regularly unraveled by big plays. But the offense needs upgrading as well.

D’Wan Mathis, who was the starter for Georgia in the 2020 opener, is in his second season with the Owls and he’s the incumbent starter at quarterback. Reduced to playing seven games because of injuries, he threw for six touchdowns and four interceptions.

Duke hasn’t had a winning season since 2018, when it capped an 8-5 mark by defeating Temple in the Independence Bowl. Temple went 8-5 in 2019 for its most recent winning campaign.

“It’s important in the sense that we’re trying to set a standard,” Drayton said. “We’re trying to get this program back to a Temple-tough standard.”

Temple’s team is so young that more than half of the players on the roster have four years of eligibility remaining.