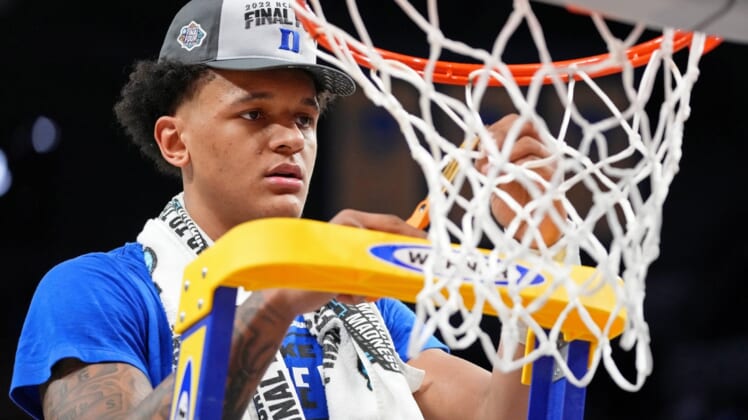 Duke star Paolo Banchero, a potential No. 1 overall pick, declared for the 2022 NBA Draft on Wednesday.

The consensus All-American and ACC Rookie of the Year thanked family, coaches and teammates and announced his widely expected decision to turn pro with a video message on social media.

Duke advanced to the Final Four in the 2022 NCAA Tournament in coach Mike Krzyzewski’s final season but lost to rival North Carolina. Banchero had 20 points and 10 rebounds against the Tar Heels for his 12th double-double.

“Paolo had a truly incredible season and is absolutely ready to attack the next phase of his career,” Coach K said in a statement posted to Twitter. “He put up remarkable numbers and won multiple awards, but he always put the team first. Paolo is a great leader in that regard and someone all of our players admired, even though he was just a freshman.

“He is so dynamic and explosive and a willing passer with great court vision — a model player in today’s NBA game. He did whatever we asked at a very high level. I loved having him and his family in our program and wish him all the best as his professional career begins.”

Banchero and Gonzaga freshman center Chet Holmgren are widely considered the top two prospects in the 2022 draft class. The NBA Draft is on June 23 in Brooklyn.