Duke Blue Devils head coach Mike Krzyzewski is considered one of the best minds in the history of college basketball.

Coach K, as he is known, took over as the Blue Devils head coach back in 1980 after a pedestrian five-year run with Army.

The rest is pretty much history. After struggling through his first three seasons in Durham, Mike Krzyzewski has led this team on an historic run that has included five national championships.

Coach K and his Blue Devils took on a familiar foe in the Round of 32 in the 2022 NCAA Tournament Sunday evening, going up against Tom Izzo’s Michigan State Spartans. As the No. 2 seed in the West Region, Duke found itself as heavy favorites.

However, we knew that this game was not going to be a blowout. Krzyzewski and Izzo have gone up against one another in some epic March games. Sunday evening was no different with Michigan State holding a five-point lead in the second half.

That’s when Duke went off, hitting on five consecutive shots to win by the score of 85-76. Stud freshman Paolo Banchero paced Dule with 19 points. Jeremy Roach matched Mark Williams and Wendell Moore with 15 points of his own and hit a clutch three late in the second half.

Duke went on an 11-0 run after falling down by five points, taking advantage of some messy offense on the part of the Spartans. In the process, the Blue Devils extended Krzyzewski’s career at least one more game — marking his 25th appearance in the Sweet 16. 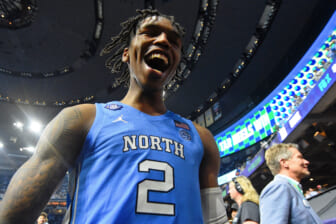