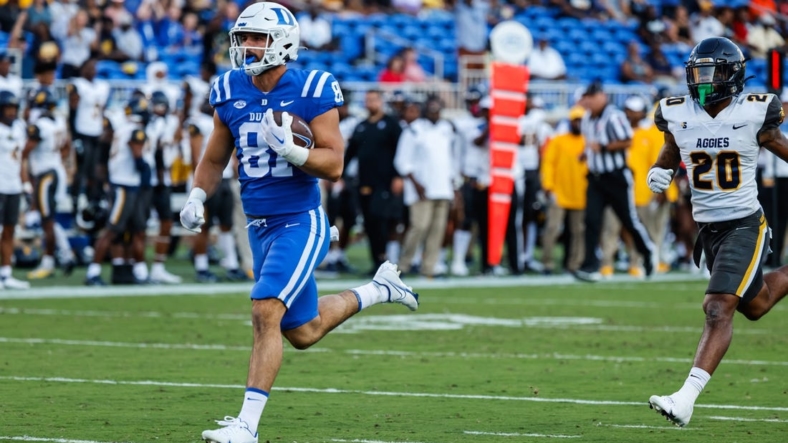 Leonard completed his first 11 passes until he was picked off by Avarion Cole late in the first half.

Leonard scored on a 56-yard scramble to open the second-half scoring.

Jaylen Coleman had a 12-yard touchdown run and Eric Weatherly scored on a 14-yard run for Duke, which cranked out 420 yards of total offense.

Bhayshul Tuten posted 133 rushing yards on 13 carries for the Aggies.

Leonard threw 38 yards to Nicky Dalmolin for a touchdown on the first play from scrimmage.

It took 10 plays for the Blue Devils to score on their second possession, with Leonard hooking up with a diving Jordan Moore for a 4-yard touchdown play.

Seventy-nine seconds later, Duke’s defense scored when DeWayne Carter picked up a fumble and ran 35 yards untouched for a touchdown.

Leonard scored on Duke’s next possession on a 2-yard keeper two plays after a 41-yard heave to Sahmir Hagans set up the opportunity.

Duke is 3-0 all-time in the series, with all the games across a four-season span.