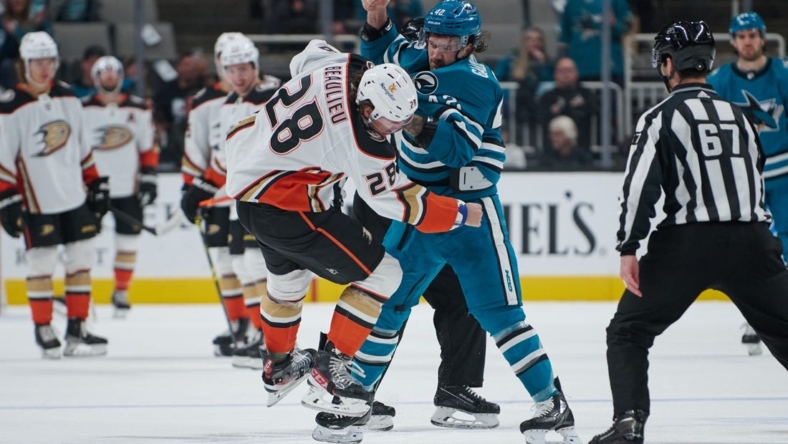 Anthony Stolarz made 48 saves in regulation and overtime and stopped two of four attempts in the shootout to help the visiting Anaheim Ducks to a 5-4 win against the San Jose Sharks on Saturday night.

Brett Leason and Mason McTavish each had a goal and an assist, and Max Comtois and Adam Henrique also scored for the Ducks, who beat the Sharks in a shootout on Tuesday.

McTavish, Henrique and Trevor Zegras scored in the shootout.

Timo Meier and Tomas Hertl each had a goal and two assists, Luke Kunin also scored, and James Reimer made 21 saves for the Sharks, who have lost four in a row, the past three in a shootout. Kevin Labanc added a goal and an assist.

The Ducks scored twice in the final minutes of regulation to send the game to overtime.

McTavish was sprung for a breakaway while coming out of the penalty box and scored his first goal of the season to cut the lead to 4-3 with 4:02 left.

Henrique swept in a rebound from just in front of the crease with 1:28 remaining to tie the score 4-4.

The Sharks outshout the Ducks 21-4 in the first period, but it was Anaheim that took a 2-1 lead into the first intermission.

Labanc was credited with a goal after his centering pass went off the stick of Anaheim defenseman John Klingberg and into his own net, giving San Jose a 1-0 lead at 3:54 of the first period.

Anaheim had its first shot on goal at 9:10 and tied the score 1-1 on their second at 12:06. Klingberg passed to Leason at the far post and he tucked the puck into the net.

Comtois scored for the third straight game off a feed from Zegras to give the Ducks a 2-1 lead at 17:20.

The Sharks tied it back up 2-2 at 8:09 of the second period when Erik Karlsson fed Meier for a one-timer from the right circle.

San Jose went ahead 3-2 at 16:35 of the second when Kunin jammed the puck across the goal line from in close while on a power play.

Hertl scored off a feed from Meier to extend the lead to 4-2 at 9:33 of the third period.