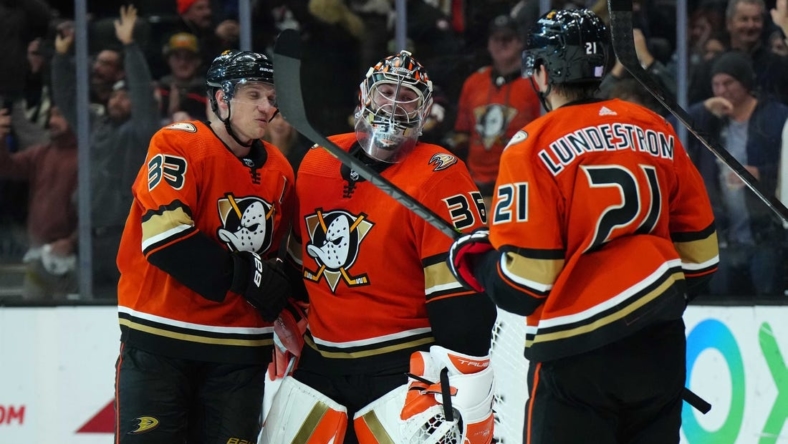 The Anaheim Ducks might not eventually reflect on Wednesday night’s win over the New York Rangers as a turning point in their season, but the Western Conference club was able to win in regulation, which it had not been able to do through almost a quarter of the season.

Fresh off finding its first victory in 60 minutes of play, Anaheim will host the Ottawa Senators on Friday afternoon in the middle game of the Ducks’ three-game homestand.

Anaheim, which sits seven games under .500 in a trying campaign under coach Dallas Eakins, had won five times in 19 games before facing the Rangers.

For the first occasion, neither of those late-game scenarios were necessary for the Ducks, who managed to win for the first time since Nov. 15 after being swept in their recent three-game road trip.

That journey featured a loss in Winnipeg and two in three nights in St. Louis in a rare back-to-back set against the same road team.

However, the season’s dismal moments were set aside against the Rangers, who advanced to the conference semifinals last season before succumbing to the Tampa Bay Lightning.

Mason McTavish, Dmitry Kulikov and Troy Terry potted goals for a 3-2 lead after two periods, and goaltender John Gibson made the score stand up as New York outshot the Ducks 17-2 over a scoreless third.

“We just wanted to win a hockey game, and I’ve got to steal some games every now and then,” said Gibson of his 41-save performance that moved him to 4-11-1. “Finally, we said enough is enough and were able to get the win tonight.

Possessing a four-game winning streak in the series, Anaheim will conclude the season series on Dec. 12 in Canada’s capital.

Currently on a four-game West Coast road swing, Ottawa has dropped the first two matchups — 5-1 to the San Jose Sharks and 4-1 to the Vegas Golden Knights.

Gridding 31st in the league with a .342 winning percentage — only Anaheim is worse, at .325 — the Senators have failed to change their mediocre play against the Pacific so far.

The lone highlight in Wednesday’s loss in Las Vegas was rookie Jake Sanderson notching his first NHL goal in his 19th game. While running the point on a first-period power play, the defenseman floated in a long shot that found its way in — one of 40 that Ottawa fired on goal — and captain Brady Tkachuk grabbed the puck after the momentous marker.

“It took a while, but I’m happy I got it and grateful my dad could be there to watch it,” said the 20-year-old Sanderson, the first Montana-born player to score in the NHL. “I feel like I’m learning every game, but I like how I’m trending. … Obviously, we’re in a rut right now, but you try to stay positive.”

The Senators aren’t only in a rut, they’re hurting, too.