Ducks, Flyers both playing for the future 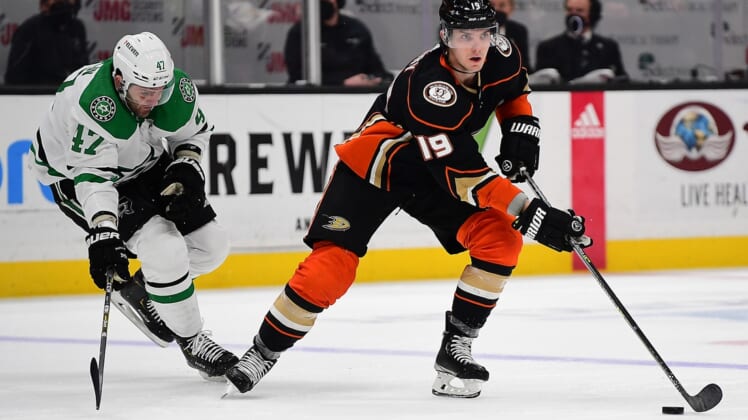 The Anaheim Ducks and Philadelphia Flyers won’t be going to the Stanley Cup playoffs this season, but the front offices of both organizations will be watching intently down the stretch and planning ahead for next season.

The Ducks are scheduled to open a four-game road trip against the Flyers on Saturday night.

Anaheim (28-32-12, 68 points) will be trying to build on whatever positives came out of a 4-2 loss to the visiting Calgary Flames on Wednesday, the 13th loss in the past 14 games for the Ducks.

“I thought, overall, our game was better than it has been,” Ducks forward Adam Henrique said. “Getting to the front of the net, getting to our forecheck, winning more puck battles. Simply playing more as a group, allowing ourselves to get on the forecheck as a unit, defending as a unit. The details that you need in your game to win.”

“With some of the youth we’ve injected, these guys are not just getting an opportunity to play, they’re having an impact on the game,” Flyers interim coach Mike Yeo said. “All of the guys are responsible, all the guys can skate.”

Tippett said he’s getting more comfortable with Philadelphia with each trip over the boards.

“When you can learn more about the guys and more about the systems, you get familiar with the organization and it makes you feel more comfortable and more confident,” he said. “I feel my game has gotten better with each and every game, whether it’s holding onto pucks or getting shots off.”

Philadelphia also welcomed back center Scott Laughton for its home-and-home with Columbus. He had missed 12 games with a concussion.

The Ducks were happy to have leading goal-scorer Troy Terry back against the Flames after he missed the previous game because of swelling around his left eye caused by a fight with Jay Beagle of the Arizona Coyotes.

Terry had his only NHL hat trick in a 4-1 victory against the visiting Flyers on Jan. 4.

Trevor Zegras continues to contribute for Anaheim as well. He scored his 18th goal of the season against Calgary to give him seven points (two goals, five assists) in his past eight games.

Henrique also scored for Anaheim to give him 11 points (five goals, six assists) in his past 13 games.

Ducks coach Dallas Eakins liked the way his team played in its most recent game, despite suffering another loss.

“We still gave up some goals there where we could have been better, and we’ll continue to work on that,” he said. “Our bench was up, we played with pace, we never got frustrated, it’s all the check marks that you really want to build off of.