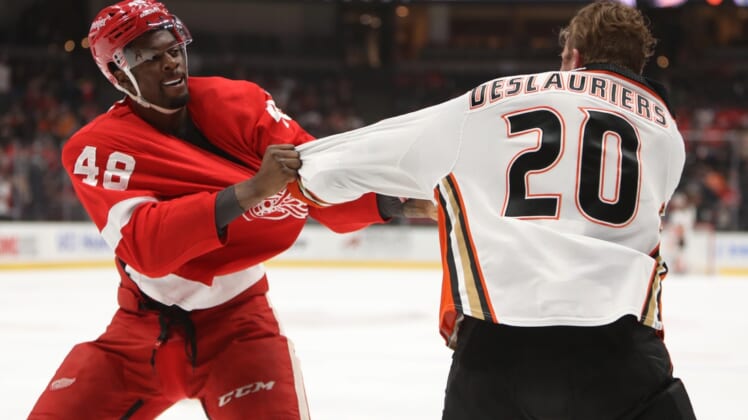 Anaheim goalie Lukas Dostal was a winner in his first NHL start, stopping 33 of 36 shots. Dostal collected three saves in overtime as Detroit kept the puck for most of five minutes. Anaheim caught a break when Pius Suter rang a goalpost less than two minutes in.

Thomas Griess made 24 saves for the Red Wings, but it wasn’t enough to keep them from dropping their fourth game in five outings. Detroit did not score during the shootout.

The game was rescheduled from Thursday night, when it was postponed due to COVID-19 issues among the Ducks’ roster.

Anaheim took a 3-2 lead on Max Comtois’ first goal of the season at 2:01 of the third period off a perfect centering feed from Rakell. But Detroit tied the game at 7:55 when Vladislav Namestnikov deflected Jordan Oesterle’s point shot past Dostal for his 10th tally of the season.

Anaheim initiated scoring at 6:32 of the first period, just 25 seconds into its first power play. Cam Fowler’s point feed set up Zegras for a one-timer from just above the right faceoff dot that beat a sprawling Greiss for Zegras’ ninth goal.

Detroit equalized just 21 seconds into the second period as its 31st-ranked power play took advantage of a 5-on-3 chance. Filip Hronek skated unfettered into the high slot and ripped a slapper over the glove hand of Dostal for his fourth marker.

Tyler Bertuzzi gave the Red Wings their first lead at 15:07 with his 16th goal. Marc Staal’s wraparound attempt drifted to the left side of the net and Bertuzzi was in the right place to slip a wrister into the open half of the net.

But Terry tied the game at 18:04 with his 22nd goal, a wrister from the slot that deflected off the right post and rapidly drilled the center of the net. The carom was so quick that the officials said it struck the crossbar, but replay overturned the call moments later.