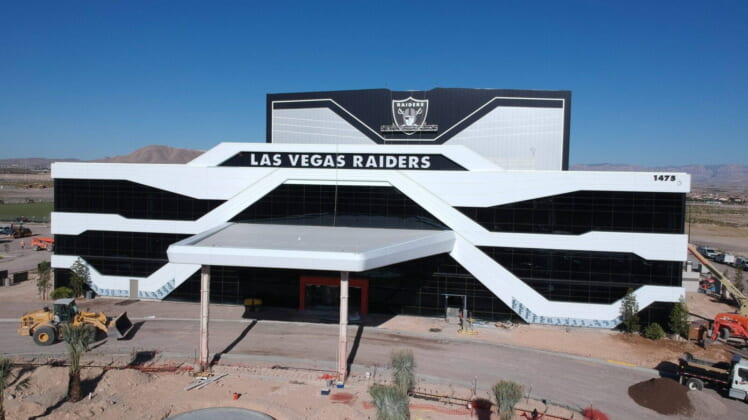 The Silver and Black Today drone took to the skies high above Henderson, NV, to check on progress of the Las Vegas Raiders headquarters and training center.

The Las Vegas Raiders Headquarters construction update took us to Henderson this morning to fly the Silver and Black Today drone over the almost completed project.

Exterior signage – include the Las Vegas Raiders legendary shield logo – is progressing and near completion.

The three outdoor practice fields are now sodded and being maintained and exterior curbing and landscaping has also progressed.

The Raiders are due to move into the building in June with the entire team taking up residency after training camp is completed in Napa in July.

The new Las Vegas Raiders Intermountain Healthcare Training Center is the team’s new $75 million 323,000 square feet foot home. The facility will include one full and one half indoor field, three outdoor fields, a 200-seat auditorium, pool, training and locker room, offices and a multimedia studio. Included will be the team’s office and headquarters to house the entire organization in Southern Nevada.