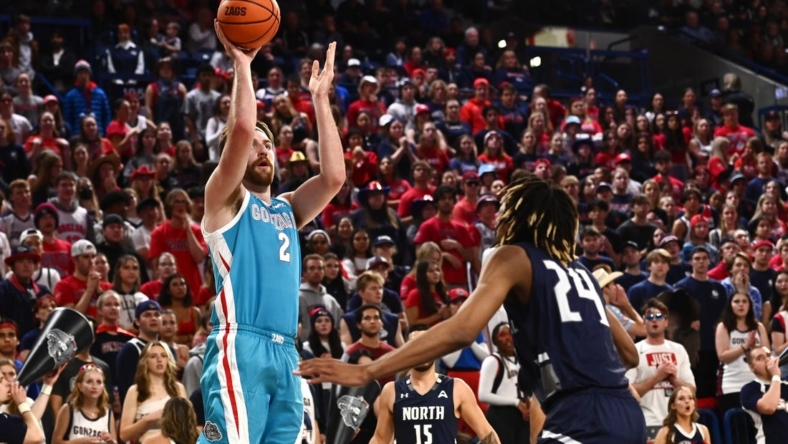 Preseason All-American Drew Timme registered 22 points and three steals and No. 2 Gonzaga broke the game open with a 26-0 run en route to a convincing 104-63 victory over North Florida in the season opener for both teams on Monday night at Spokane, Wash.

Julian Strawther added 16 points for the Bulldogs, who had a 66-24 edge in points in the paint and a 28-3 advantage in fast-break points.

Malachi Smith had 15 points on 7-of-10 shooting in his Gonzaga debut after transferring from Chattanooga, where he was Southern Conference Player of the Year.

Rasir Bolton scored 11 points and Anton Watson contributed 10 points and five steals for the Bulldogs. Hunter Sallis also scored 10 points for Gonzaga, which led by as many as 42 points.

North Florida connected on 35.6 percent of its shots and was 8 of 30 from behind the arc. The Ospreys committed 22 turnovers to the Bulldogs’ 14.

Hendricksen’s 3-pointer gave the Ospreys a 10-8 lead three-plus minutes into the contest before Gonzaga delivered the knockout punch.

Watson opened the 26-0 burst with back-to-back baskets to put the Bulldogs ahead to stay. Smith later converted consecutive fast-break layups to make it 22-10 with 12:56 left and his 3-pointer with 9:25 remaining stretched the lead to 21.

Strawther made two free throws to complete the surge and make it a 34-10 with 8:43 left.

Hendericksen rebounded his own miss and scored with 8:14 left to end the North Florida drought at eight minutes, 38 seconds. The Ospreys missed 11 straight shots during the funk.

Gonzaga later elevated the lead to 31 before settling for a 53-23 lead at the break. Timme scored 16 points in the half.

The Bulldogs opened the second half with a 10-2 surge to increase the margin to 38.

Smith’s layup made it 80-41 with 11:57 to go and Gonzaga continued to control the contest to the finish.