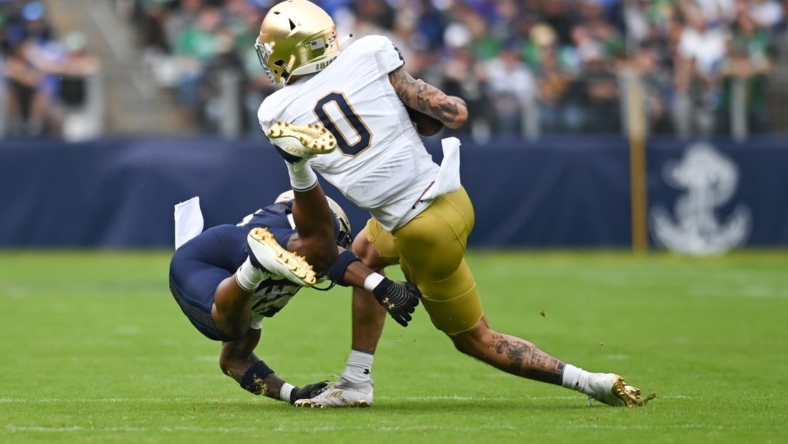 Pyne completed 17 of 21 passes for 269 yards and four touchdowns. He also added a rushing touchdown for the Fighting Irish (7-3), who have gone 6-1 since opening the season with back-to-back losses to Ohio State and Marshall.

Pyne and Notre Dame scored all 35 points in the first half and seemed to be in cruise control in the second half as Navy furiously pushed back but had its comeback bid ended after it failed to recover an onside kick with 1:21 remaining.

Daba Fofana rushed for 133 yards on 15 carries and scored a touchdown for Navy (3-7). The loss locked in a losing season for Navy, which will need to win out and get outside help for any hope of bowl eligibility this season.

Notre Dame’s offense clicked early. On the opening drive, Pyne connected with Audric Estime on a 30-yard touchdown pass. Pyne then connected with Braden Lenzy on a 38-yard pass that made it 14-0 with 4:28 remaining in the first quarter.

Fofana countered for Navy with a 36-yard rushing touchdown with 2:19 remaining, making it 14-6 after a missed extra point.

Notre Dame then outscored Navy 21-7 in the second quarter to seemingly take full control of the contest.

Pyne connected for passing touchdowns of Chris Tyree and Jayden Thomas, while also adding his own 11-yard rushing score. Even with a 2-yard touchdown run by Navy’s Xavier Arline, the halftime score had ballooned to 35-13.

Bijan Nichols did connect on a 26-yard field goal in the third quarter for Navy, which made it 35-16.

A change-of-pace pass led to a touchdown on the first play of the fourth quarter for Navy, cutting the deficit to 35-24 as Mark Walker ran uncovered down the middle of the field for a 34-yard touchdown pass from Arline.

Arline was later injured and left the game in the fourth quarter, and backup quarterback Maasai Maynor capped another Navy scoring drive with a 20-yard strike to Maquel Haywood with 1:21 remaining, setting up an onside kick that Notre Dame snuffed out to seal the win.