Drew Lock will open the preseason as the Denver Broncos starting quarterback and it seems the third-year passer is in a great spot to win the position battle over Teddy Bridgewater.

After passing on Justin Fields in the 2021 NFL Draft, many presumed the Broncos would make Bridgewater their starting quarterback. With his experience as a starter and the consistency he offers, he seemed like the best of Denver’s options.

But even with a new regime running the show, it seems the Broncos are leaning towards making their 2019 second-round pick the starter in Week 1. 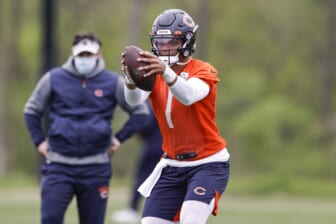 According to NFL Network’s Ian Rapoport, Lock is starting the preseason opener against the Minnesota Vikings and he is in the driver’s seat in Denver’s quarterback competition.

It’s not a total surprise for the Broncos. While John Elway is responsible for drafting Lock, the organization remains very high on its young quarterback. There was even some renewed buzz about Lock after his final stretch to end the year.

The 24-year-old certainly offers the most upside. Unlike Bridgewater, Lock boasts the arm strength to make every throw. In an offense with Pro Bowl talents like Courtland Sutton and Jerry Jeudy, a quarterback with Lock’s physical talent elevates the Broncos’ ceiling.

But the mental mistakes haunted Denver last season. Lock failed to prove he can consistently make the right decisions and some of the baffling risks he took led to costly interceptions. The Broncos boast one of the best rosters in the NFL outside of the quarterback position, so consistency is more important than volatility.

Even if Lock fares well against the Vikings, Bridgewater is expected to start the next preseason game. With plenty of film on both players, the coaching staff should have a decision a week before the regular season kicks off.