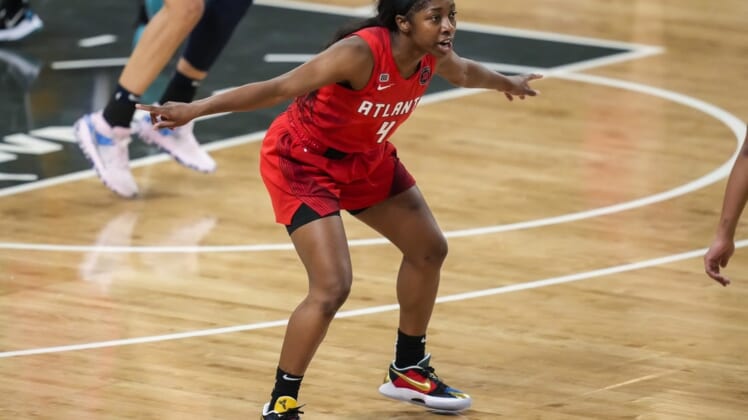 The Atlanta Dream will look for their third win in as many outings against the visiting Indiana Fever when the teams meet in College Park, Ga.

The Dream recorded an 85-79 victory in Indianapolis on May 15 before posting a 101-79 road triumph over the Fever two days later.

Atlanta (6-4) has lost three of five games since that sweep, while the back-to-back losses began a stretch of seven setbacks in eight contests for Indiana (3-9).

The Dream are coming off a 73-65 loss at home against the Chicago Sky on Friday. That setback snapped a two-game winning streak for Atlanta.

Rhyne Howard, the No. 1 overall pick of the 2022 WNBA Draft, reverted to her cold shooting touch and made only 2 of 12 shots from the field and was held to five points.

In a 70-50 loss at the Washington Mystics on May 24, Howard missed all nine of her field-goal attempts and finished without a point.

“We have to be ready; we have to move on to the next play,” Atlanta coach Tanisha Wright said of the matchup with Indiana. “We need to have a short-term memory. This (stinks), but we have another game and we have to be ready for that. We can’t dwell on this one.

“It’s hard to beat a team three times in one season. We have to come in and have really good focus from the start of the game.”

Indiana dropped an 87-74 decision to the New York Liberty on Wednesday.

The Fever showed signs of fatigue after playing the night before at home, an 87-75 setback to Washington.

Kelsey Mitchell, who ranks second in the WNBA in average points per game (19.4), erupted for 26 versus the Mystics before finishing with 17 against the Liberty.

The Fever are 1-2 under interim head coach Carlos Knox, who took over after the team parted ways with Marianne Stanley on May 25.

“He’s been a very positive person,” Destanni Henderson said of Knox. “He always comes in with a lot of energy. I feel like he speaks the truth. He doesn’t try to (say) anything other than that, and he has so much passion for the game.”