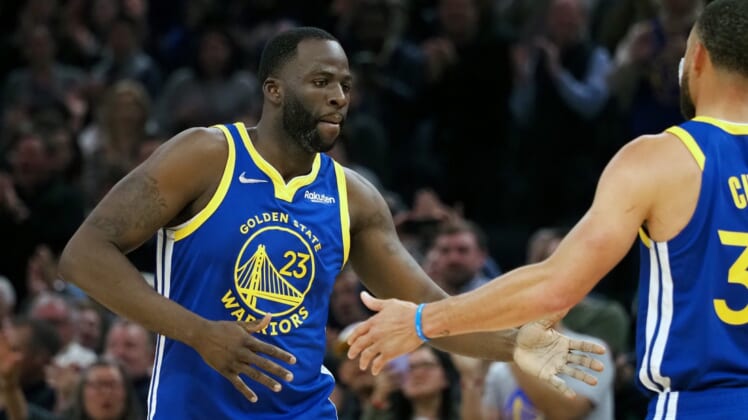 Draymond Green reunited with birthday boy Stephen Curry and Klay Thompson for a powerful offensive performance Monday night as the Golden State Warriors both passed and shot the ball brilliantly in a 126-112 romp over the Washington Wizards in San Francisco.

Returning from a back disc injury that kept him out since January, Green contributed six points, seven rebounds and a team-high-tying six assists to Golden State’s fourth straight win in just 20 minutes off the bench.

Other than a seven-second cameo in Thompson’s season debut on Jan. 9, Green shared the court with Curry and Thompson for the first time in 1,005 days — since the night Thompson tore a knee ligament in Game 6 of the 2019 NBA Finals.

Curry, who turned 34 on Monday, seemed to benefit most from Green’s reappearance, shooting 16-for-25 overall and 7-for-14 from 3-point range in a game-high, 47-point performance. Curry also found time for six rebounds and a six assists.

The 40-point performance was his seventh of the season.

Making four 3-pointers, Thompson put up 20 points, as did teammate Jordan Poole. Jonathan Kuminga chipped in with 12 to complement a game-high-tying eight rebounds.

The Warriors finished with 26 assists on 45 hoops and shot 53.6 percent as a team despite missing All-Star Andrew Wiggins, who sat out the game with an illness.

Kristaps Porzingis amassed 25 points and a game-high-tying eight rebounds for the Wizards, who completed a winless four-game Western swing.

Kentavious Caldwell-Pope had 19 points, Deni Avdija 13, Rui Hachimura 12, Ish Smith 11 to go with a game-high-tying seven assists and Kyle Kuzma 11 to complement eight rebounds for the Wizards, who lost despite shooting 51.2 percent.

The Warriors trailed only briefly, at 18-17 in the eighth minute of the game, and went up by as many as 19 in the second quarter. Golden State was held scoreless for almost four minutes in the fourth quarter as the Wizards climbed within 110-101 with 5:25 to play.

Curry ended the drought with a layup and then bombed in his sixth and seventh 3-pointers of the night, increasing the margin to double digits again and paving the way to a comfortable win.