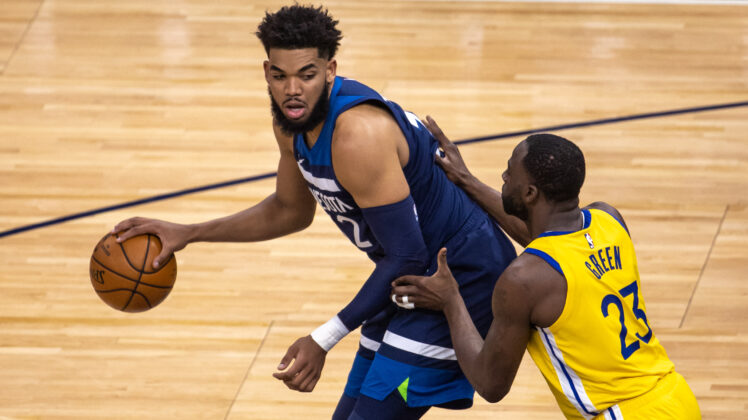 Golden State Warriors forward Draymond Green knows a few things about being a part of a consistent team who knows how to get the job done in clutch time of the NBA Playoffs. Whereas Karl-Anthony Towns and the Minnesota Timberwolves are very youthful and inexperienced when it comes to postseason play.

One thing we’ve seen with the success of the Wolves as of late has been their improved confidence and willingness to strut their stuff when the game is going well. Unfortunately, there have been several other times, when keeping it real goes wrong, such as letting the Memphis Grizzlies back in the game not once, but twice during their first-round playoff series.

Some, like Malik Beasley of the T-Wolves have suggested they should have already closed out their series, winning 4-1, since they’ve controlled the majority of the games so far in the matchup. Yet, the Grizz lead 3-2, with Game 6 coming up tonight as the series heads back to the Target Center in Minneapolis.

There have been several moments in which KAT, in particular, has either not played well, largely due to not being able to keep his emotions in check, leading to foul trouble. Then there was also this viral moment when Towns could be seen on the sidelines saying “We in Minnesota now” during Game 3, in which the Wolves at one point squandered a 26-point lead.

Basically, Green, a three-time NBA Champion is sick and tired of hearing all the talk emanating from Towns this season and has some advice for the three-time All-Star. Speaking on his podcast, the “Draymond Green Show”, the former Defensive Player of the Year didn’t hold back. Here’s the clip.

Draymond Green is right about KAT

It’s true what Green says, it’s incredible how the Wolves have managed to let their leads slip away. At the same time, when Green says he’s never known Towns to be such a big talker, well that’s the result of him finally experiencing true success for the first time in his NBA career. It’s OK for Towns to finally be coming out of his shell a bit more now that he’s helped lead the Wolves to the playoffs outside of Jimmy Butler’s shadow.

The other thing, Towns suffered the loss of his mother in April of 2020. It makes sense that he wasn’t exactly feeling himself last year. Basically, Green is wise when it comes to basketball, breaking down the plays and holding his own defensively, but in this case, he should probably stay in his lane. This seems like a personal beef from Green toward KAT.

At the same time, Towns does need to back up his actions. There’s no reason for him to disappear in the playoffs once frustrations take hold, it’s time to be a leader and there just hasn’t been enough of that from Minnesota’s longest-tenured player on the roster.