When Draymond Green and Kevin Durant got into a legendarily heated on-court argument in 2018 as Golden State Warriors teammates, it was widely believed that was the inciting incident that led KD to leave in free agency for the Brooklyn Nets.

Fast forward a few years: Durant and Green are fresh off helping Team USA to a gold medal at the Tokyo Olympics, and have indubitably patched things up. It’s to the point where Green actually holds Warriors head coach Steve Kerr and GM Bob Myers responsible for Durant’s departure.

In an extensive interview with Bleacher Report that ran Wednesday, Green chatted with Durant about the fallout from their dispute, and how poorly Golden State’s brass handled the situation:

Geez, gents — tell us how you really feel!

But in all seriousness, it sounds like Kerr and Myers both somewhat botched an all-time talented, stacked team that could’ve stayed together had they handled things differently.

Due to the number of profanities in the clip above, it’s probably easier to just summarize what was said. The main takeaways from the brief dialogue between KD and Green are pretty significant, though.

Durant thought the coaching staff and management tried to sweep his kerfuffle with Green under the rug, rather than addressing it and letting the Warriors speak their peace as a whole to bury the hatchet.

Then, Green said he had to meet with Golden State’s leadership — not players, mind you — for an hour and 45 minutes after he and Durant got into their heated exchange. They weren’t getting through to him, called him back the next morning, and continually demanded an apology to Durant.

When Myers informed Green that the Warriors would suspend him for the next game, he laughed in their face.

“Wow that was not the reaction I was looking for or expecting,” Myers said, according to Green, who explained he did that instead of cursing them out.

Big-time trade rumors have been floating around Golden State throughout the NBA offseason. The Dubs have been linked to Ben Simmons, Bradley Beal and other stars, as the team’s current core is imploring management to make a big splash on the transaction wire. Thus far, it hasn’t happened.

Green was thought to be untouchable in any prospective deal, yet based on his remarks directly aimed at Kerr and Myers here, is it possible he’s laying the groundwork for his exit?

Because of his extraordinarily extroverted personality, demonstrative — no, often melodramatic — on-court demeanor and the reactions he draws as a result, Green is always going to be a lightning rod for scrutiny. He’s obviously butted heads with Kerr before, and appears to take serious issue with how Myers handled the Durant fiasco.

Heck, Durant’s final action in a Warriors uniform ended with a torn Achilles, which essentially put his basketball future in jeopardy in the sense that there was no guarantee he’d return to his previous elite form. Durant has since proven he’s far from finished, of course, but the point still stands. 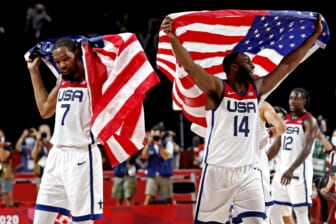 With Stephen Curry, Klay Thompson and Green, Golden State has a trio that’s stuck together through the ups and downs of an epic run over the last decade or so. Green has obviously put aside any differences he has with Kerr and Myers to be a team player and provide tremendous value for the Warriors throughout his career.

Whether Green is just being his overly candid self as usual, or his digs at Kerr and Myers hint at a divide between the core players and the organization, or even an eventual trade, it’s undeniable that Golden State could’ve really had a dynasty had KD stuck around.

As it stands, the Warriors seem to be on the rise entering the 2021-22 campaign, Durant is thriving in Brooklyn, and even while he was with Golden State, he still won two NBA championships with Green. Everything worked out pretty well overall, considering the obvious internal turbulence going on at the time.