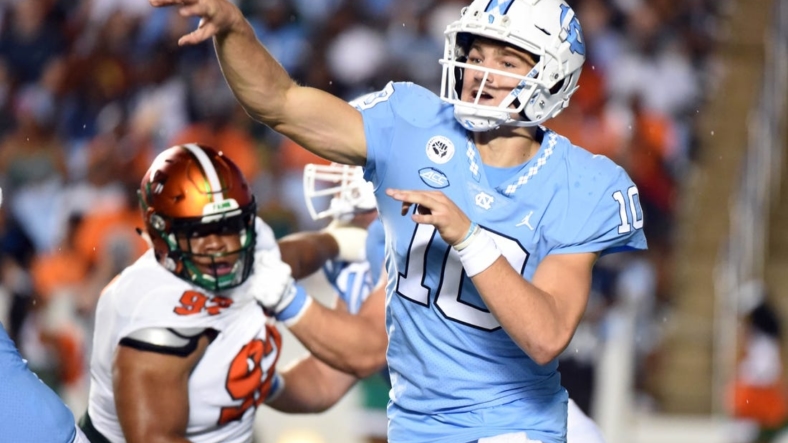 Redshirt freshman Drake Maye threw for five touchdowns in his first college start as North Carolina pulled away from short-handed Florida A&M to begin the season with a 56-24 victory Saturday night in Chapel Hill, N.C.

Florida A&M, a Football Championship Subdivision team, was without about 20 players because of various eligibility issues. Those problems put the game’s status in jeopardy a day earlier before it was confirmed that the Rattlers would make the trip.

Josh Downs caught two of Maye’s touchdown throws, the first coming with five seconds to play in the first half. The next came in the fourth quarter.

No North Carolina player had ever thrown for five touchdowns in a season opener. Maye also became the school’s first player to toss five touchdown passes in his first career start.

Florida A&M quarterback Jeremy Moussa threw for two touchdowns with an interception. He was 28-for-38 for 279 yards.

Even with Florida A&M limited in depth on the offensive line because of the unavailable players, the Rattlers compiled 353 yards of total offense.

Moussa tossed touchdown passes of 17 yards to AJ Davis and 22 yards to Tre Davis, the latter closing the gap to 35-24 late in the third quarter.

Jaylen McCloud had a 5-yard touchdown run for the Rattlers.

The Tar Heels lost starting cornerback Tony Grimes to an upper-body injury early in the game.

This was the first football meeting between Florida A&M and North Carolina.