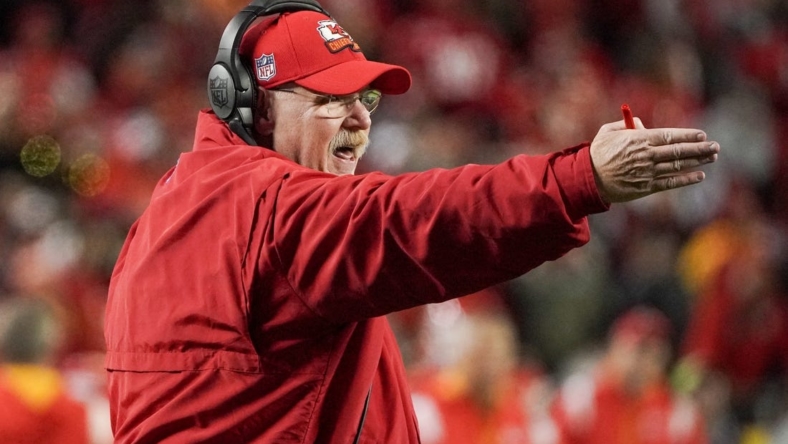 Reid will be pitted against one of his former disciples Sunday when the Chiefs take on the visiting Jacksonville Jaguars in an AFC showdown.

Doug Pederson is in his first year as coach of the Jaguars (3-6) but knows a thing or two about Reid after serving on his coaching staff in Kansas City and Philadelphia after also playing for him in 1999.

Reid knows Pederson will have his team ready to go.

“They look organized, and they have good energy,” Reid said of Jacksonville. “When you watch enough tape, there’s a certain trust that you can see through the players to the coaches indirectly.”

“He’s taught me a lot about this game. It’s always fun to go against him and his teams because you know they’re going to be well coached and well disciplined,” Pederson said. “But once we tee it up, we’re focused on the game.”

In an attempt to oust his former mentor, Pederson will likely heavily utilize running back Travis Etienne, who blossomed midway through the season despite not starting the first five games.

Etienne, who missed last season due to a foot injury, has officially taken over as Jacksonville’s lead back after James Robinson was traded to the New York Jets. He’s rushed for over 100 yards in each of the last three games while recording all four of his touchdowns during that span.

Due to his increased workload, Etienne has also climbed his way up the leaderboards and now has the fifth-most rushing yards in the league (680).

“If you’re not giving that ball to one (Etienne) at least 25 times a game, what are you doing?” Jaguars tight end Evan Engram said according to the team’s website. “That kid’s special. Our offensive line is one of the best in the league, too, so we have to run the ball. That’s our identity. We have to keep going with it.”

Following a performance in which he racked up 109 yards along with two touchdowns in Jacksonville’s 27-20 win over the Las Vegas Raiders last Sunday, Etienne now turns his attention to a Chiefs defense that has struggled to contain the run as of late.

Derrick Henry went for 115 yards as part of the Tennessee Titans’ 172-yard rushing performance against the Chiefs last weekend, but Kansas City was able to escape with a 20-17 win in overtime.

The Chiefs will be searching for their third straight win, but might be without wide receiver Mecole Hardman, who missed Wednesday’s practice with an abdomen injury.

Safety Rayshawn Jenkins (concussion) did not participate in the Jaguars’ practice on Wednesday, while Engram (back) was limited.