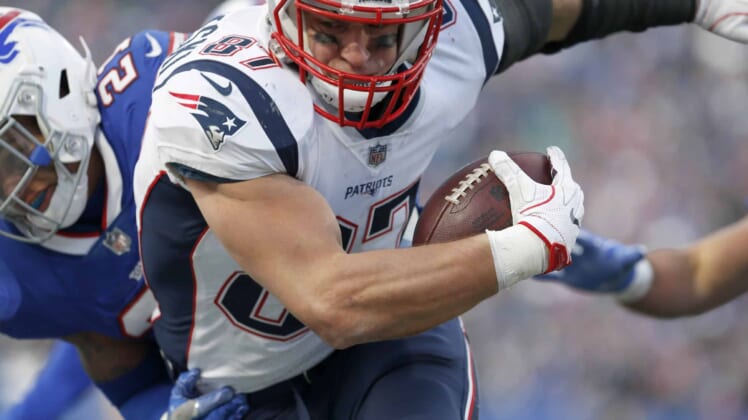 It’s hard to imagine a scenario where the Jacksonville Jaguars would win the AFC Championship despite Rob Gronkowski putting up big numbers. If the Jags are going to win, they must find a way to contain Gronk. But according Jags head coach Doug Marrone, containing the New England Patriots’ tight end is easier said than done.

8.#Jaguars HC Doug Marrone on stopping Patriots TE Rob Gronkowski: “Hope they don’t throw him the football … hope he drops it. There’s no secret formula. I’d like to watch a game where someone has been able to do it…”

Certainly, Gronk’s combination of size and speed has been a riddle for opposing defensive coordinators and coaches ever since he came into the league in 2010. Oftentimes, Gronk’s drops or Tom Brady looking elsewhere have been the only real answer for opponents.

If 2017 is an indicator, Gronkowski is going to make big plays. Jacksonville will just have to find a way to limit his catches.

During the 2017 regular season, New England was 1-1 in games where Gronkowski did not play. In the two losses that he was a part of, he actually averaged more yards per reception (18.3) than he did in the 12 wins (15.4). The difference was that in those two losses, he caught only six combined passes for 113 yards and no touchdowns.

Conversely, in the 12 wins, he caught 63 balls for 971 yards with eight touchdowns. Or, to put it another way, he averaged just short of six receptions per game for better than 90 yards. Even that includes a Week 17 performance in which he caught zero passes. The Divisional Round win over the Tennessee Titans was similar, with Gronk catching six passes for 81 yards and a score.

Whether that will impact Jacksonville’s strategy on Sunday remains to be seen. But if Gronkowski is catching a lot of passes in the AFC Championship Game, chances are pretty good that we’ll be seeing him and the Patriots two weeks later in Super Bowl LII.