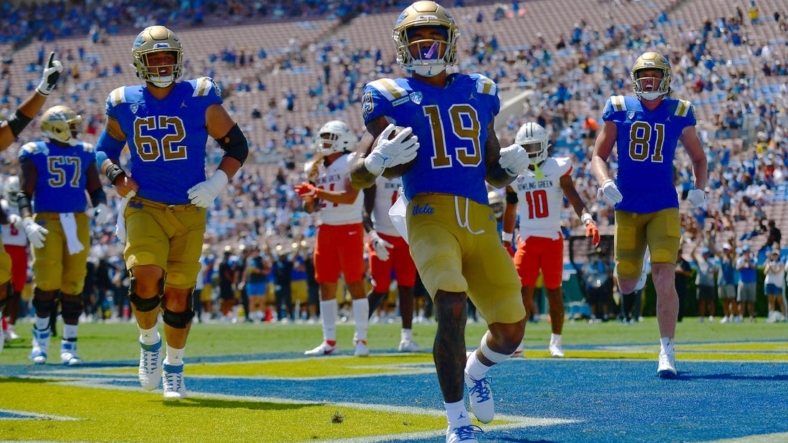 Dorian Thompson-Robinson passed for 298 yards and two touchdowns and ran for 87 yards and two more scores to lead UCLA to a 45-17 win against visiting Bowling Green in the season opener for both teams on Saturday afternoon at the Rose Bowl in Los Angeles.

Bowling Green quarterback Matt McDonald completed 17 of 34 passes for 125 yards and a touchdown. The Falcons were held to 162 total yards, including 37 on the ground.

McDonald found tight end Christian Sims over the middle with a short pass and he sliced through the UCLA defense for a 22-yard touchdown that extended the lead to 17-7 with 13:54 left in the first half.

The 101-degree heat seemed to wear down Bowling Green more than the Bruins, however.

UCLA started its comeback with a 24-yard field goal by Nicholas Barr-Mira.

Thompson-Robinson, who completed 32 of 43 passes with an interception, then found Allen on a short screen pass and he dodged defenders for a 20-yard touchdown to tie the score 17-17 with 4:04 left in the first half.

Keegan Jones then hauled in a 52-yard touchdown strike to give the Bruins a 24-17 lead with 2:18 left in the half.

UCLA kept the momentum in the second half, extending the lead to 31-17 on their first possession on a 4-yard touchdown run by Charbonnet.

Thompson-Robinson scored six seconds into the fourth quarter on an 8-yard dash to stretch the lead to 38-17.

Cashius Howell blocked UCLA’s first punt of the season and Charles Rosser recovered it in the endzone for a 7-0 lead 1:14 into the game.

Thompson-Robinson came back with his 68-yard touchdown scamper to tie the score 7-7.

Following an interception by Thompson-Robinson and a muffed punt by UCLA that led to a Bowling Green field goal, the Falcons took a 10-7 lead into the second quarter, despite being outgained in yards 156-60.