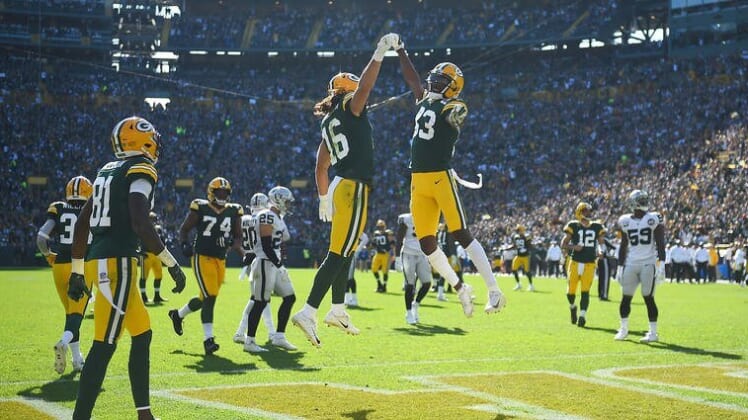 GREEN BAY, WISCONSIN – OCTOBER 20: Jake Kumerow #16 of the Green Bay Packers celebrates with Marquez Valdes-Scantling #83 after scoring a touchdown during the second quarter against the Oakland Raiders in the game at Lambeau Field on October 20, 2019 in Green Bay, Wisconsin. (Photo by Stacy Revere/Getty Images)

While fans take out their frustration for the latest Oakland loss on their quarterback, it was the Raiders defense who played a bigger role in the blowout.

This column originally appeared on the CBS Sports Radio 1140 website.

One step forward, two steps back.

With a young roster and lots of new pieces in 2019, it’s what I’ve been telling Raiders fans to prepare for since the offseason. At times, the Raiders have played with vigor, discipline and that has been refreshing after a disappointing 2017 and 2018.

And other times, like Sunday in Green Bay, this team feels like it’s years away from being a playoff contender. Aaron Rodgers, my vote for the greatest overall quarterback to play the game, made the Raiders secondary look like the local high school team. The Packers never started a drive outside their own 20 yet they scored six touchdowns on the day – five in the air and one on the ground from Rodgers himself.

It was a good old-fashioned butt-kicking. The Raiders defense couldn’t muster a pass rush – again – and that left their thin secondary exposed. Gareon Conley continues to look like another Reggie McKenzie bust and the big free-agent addition of the offseason, LaMarcus Joyner, was toast this week. Erik Harris, Karl Joseph, and Daryl Worley were overmatched all day despite Green Bay being without their best offensive weapon Devontae Adams.

We were about to make it 17-14 Raiders. That was a big play in the game. – Jon Gruden on Derek Carr’s goal line fumble.

The Raiders yielded 418 yards to the Packers offense despite their own offense, led by often maligned quarterback Derek Carr, gaining 484 yards on the day. The Oakland defense surrendered 429 yards in the air to Rodgers on the day. It was a bloodbath.

Carr had another good statistical performance going 22-of-28 for 293 yards and two touchdowns. Yet it as the fumble at the goal line and the ill-advised throw in the red zone, leading to an interception that killed the team’s chances against Green Bay, many are focusing on as the reason this team lost their third game against three wins this season.

With the Oakland defense torched that badly, many want to blame the loss on the two turnovers in the red zone by Carr. While both plays were significant errors in judgment and had great impact on the game, yet they were not the sole and most significant reason this team was beaten and beaten badly.

Of note: Carr’s fumble was his 23rd lost since his NFL career began in 2014, per ESPN. Not something to be proud of to be certain.

Head coach Jon Gruden defended his quarterback after the game while at the same time agreeing the first turnover was a significant turning point in the loss.

“I think he’s trying to give a great effort, trying to layout and score and the ball slipped out of his hands,” Gruden said. “If he would have scored, we would have felt pretty good but unfortunately after that play, the next time we got the ball we were down 28-10. We were about to make it 17-14 Raiders. That was a big play in the game.”

Carr, himself, always one to take responsibility when he makes mistakes, did so again when talking about the two costly turnovers – including the fumble.

Maybe I have to go two hands, trying to extend with one hand isn’t smart, that’s stupid. It sucks, man. I let my team down on that. – Derek Carr on his fumble.

“In that moment, it’s so hard,” Carr said. “It’s so hard not to try. That’s everything I’ve ever been about my entire life is to try. Maybe I have to go two hands, trying to extend with one hand isn’t smart, that’s stupid. It sucks, man. I let my team down on that.”

There it was. He took responsibility and, hopefully, learned from the error.

It’s unfortunate as the Raiders offense game plan worked flawlessly and Carr almost managed the game the same way. Despite his 119-passer rating on the day, it’s his lapses in judgment which are the focus of fans ire continuing to feed into the thoughts he isn’t the Raiders long-term solution at quarterback.

Whether he will be or not is yet to be seen but today’s mishaps by Carr were far less the reason for the loss as the Raiders deplorable defensive effort on the day.

“We got to play better defensively, there’s no excuse for giving up long plays like that,” Gruden said.

Even after the fumble, the Raiders had ample opportunity to make defensive stops to give Carr and the offense more shots. They just couldn’t muster the play to stop Rodgers and the Packers.

One has to wonder if defensive coordinator Paul Guenther will start feeling the heat soon. Although he’s very close to Gruden, and was much heralded coming into his stint with the Raiders, coming off a bye week the game plan certainly left a lot to be desired.

With four top draft picks on defense the past two seasons, the team’s defensive front is far too inconsistent, the linebacking corps thin, and the defensive backfield a far way from being competitive week in, week out. Gruden is always quick to point out failures like Sunday are not just on the players but the coaches as well.

Those who are convinced Carr is not the answer as a franchise quarterback found plenty of ammo Sunday to reinforce their position and their point of view was strengthened. Despite that, to think the Raiders’ sole reason for losing was the quarterback’s miscues aren’t watching the entire team’s weaknesses.

“At the end of the day, we have to finish, man,” Carr said. “We have to finish drives. We were doing a great job on third down, and that was tough. But finishing in the red zone will be, clearly, the emphasis for us this week.”

Not only is Carr right – and make no mistake, he must get better – but if this team is going to win at all and stay relevant in the AFC West and wild card race, the defense has to show up every single week.

Right now, playing defense like they did in Green Bay, it could be a long season yet again for the Raiders if the improvement isn’t rapid and significant.

One step forward, two steps back. For the Raiders and their fans, let’s hope some steps forward on defense come soon.