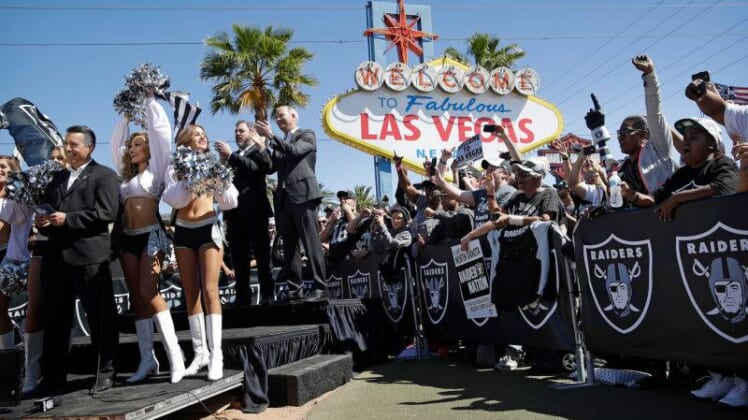 According to sources in the Oakland Raiders organization, the team isn’t even considering moving a year early to its future home of Las Vegas.

Las Vegas is a town built on wagering.

One bet you shouldn’t take is whether or not the Raiders will move to Sin City a year early as the hapless City of Oakland readies an ill-advised lawsuit over the team’s relocation to Nevada.

To put it simply: it’s not going to happen.

With news this week of Oakland’s preparation to sue the Raiders and the NFL over the team’s wise move to leave the city for greener pastures in the desert, speculation has run rampant it could mean an early arrival in the town Bugsy Siegel built. This discounts the fact there is no suitable facility to play in and the Raiders desire to only arrive once their new stadium is completed.

There’s no way in hell it ever happens. – Raiders insider

In talking with people close to the situation, I have confirmed there is no plan nor desire to move to Las Vegas in 2019. As much as Raider Nation in Las Vegas would love its team to arrive early, it’s not something the team is considering.

The Las Vegas Speedway has been discussed as a possible home for the Raiders in 2019.

More credence was given to the unsubstantiated rumor after Clark County Commissioner and current Democratic gubernatorial candidate Steve Sisolak seemed to confirm the possibility early this week. Sisolak, who was instrumental in the team moving to Las Vegas, said sites such as the Las Vegas Speedway could be a possible temporary home should the team arrive a year early. Ruling out Sam Boyd Stadium, the current dump of a stadium UNLV calls home, it was the only other viable site to consider. Yet despite his statement, the Raiders do not view the speedway or Sam Boyd as an option for 2019. Pigs would fly before that would happen.

If the City of Oakland proceeds with its bone-headed handling of the Raiders in Oakland, it could mean the Raiders would be looking for a place to play in 2019. Becoming a vagabond franchise for one year isn’t ideal for owner Mark Davis and his team, but other viable sites in California – or outside the Golden State – are a safer bet.

The #Oakland City Council has authorized lawsuit against @Raiders and @NFL over Las #Vegas move. As a result, team might leave Oakland sooner. Cmsr. @SteveSisolak says steps could be taken to welcome #Raiders before 2020.

As one insider said of the possibility of the Raiders playing in a temporary home in Las Vegas: “There’s no way in hell it will ever happens.”

The battle between the Raiders and Oakland will rage on. Where the Raiders will play home games in 2019 remains to be seen.

The sure bet is it will not be Las Vegas.