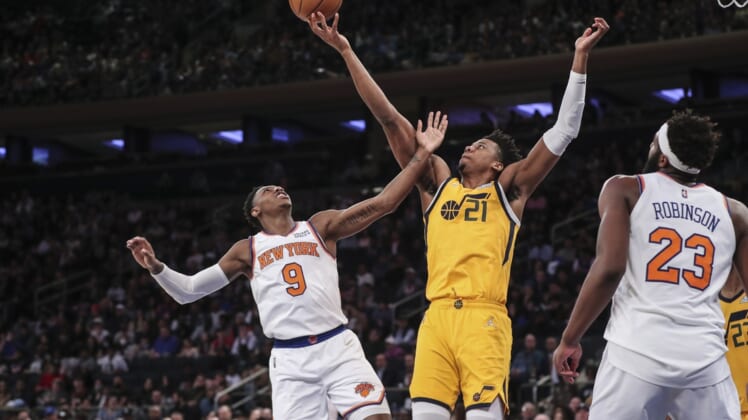 Donovan Mitchell, a New York City-area native, scored 36 points in his return to action Sunday night as the visiting Utah Jazz pulled away in the fourth quarter to earn a 108-93 win over the New York Knicks.

Mitchell — who was born about 25 miles from Madison Square Garden in Elmsford, N.Y. — missed Friday’s 121-92 win over the Los Angeles Clippers due to a calf injury. His return Sunday came as fellow star Bojan Bogdanovic missed his fourth straight game with his own calf injury.

Jordan Clarkson scored 23 points for the Jazz, who increased their lead over the idle Dallas Mavericks to two games in the race for fourth place in the Western Conference and homecourt advantage in the first round of the playoffs. Royce O’Neale and Rudy Gobert each scored 14 points while Rudy Gay added 13 points.

RJ Barrett scored 24 points and Julius Randle had a double-double (13 points, 11 rebounds) for the Knicks, who remained five games behind the Atlanta Hawks in the race for 10th place in the Eastern Conference and the final spot in the play-in tournament. The Hawks fell Sunday to the New Orleans Pelicans, 117-112.

Evan Fournier had 17 points while Immanuel Quickley (16 points) and Alec Burks (10 points) also got into double figures for New York.

The Knicks closed within five points twice early in the third before the Jazz ended the quarter on a 22-15 run to take an 85-73 lead. Quickley began keying a brief Knicks comeback by sandwiching the final points of the third quarter — a 3-pointer — with a pair of free throws following Obi Toppin’s 3-pointer to open the fourth. Mitchell twice extended the lead back to 10 with a pair of 3-pointers before Quickley scored six straight points to pull New York within 91-87 with 7:01 left.

Mitchell and Toppin exchanged dunks before the Jazz put the game away by scoring the next 12 points, a span in which Utah went 7-for-8 from the free throw line while the Knicks went 0-for-3 with two turnovers.