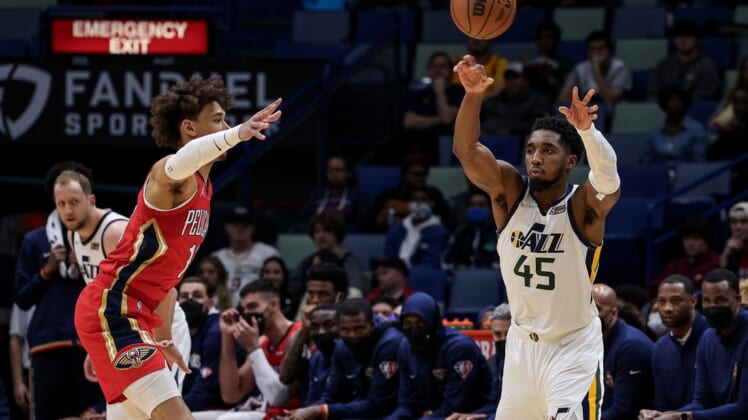 Donovan Mitchell scored 15 of his 29 points in the fourth quarter as the visiting Utah Jazz held off the New Orleans Pelicans 115-104 on Monday night.

Mike Conley added 22 points, Bojan Bogdanovic scored 21, Jordan Clarkson had 14 and Rudy Gobert had 10 points and 17 rebounds for the Jazz.

Jonas Valanciunas returned from a one-game absence while he was in the league’s health and safety protocol to lead the Pelicans with 25 points. Josh Hart added 15, Nickeil Alexander-Walker scored 13, and Devonte’ Graham and Herbert Jones had 11 each.

Leading scorer Brandon Ingram returned from a two-game absence due to a sore Achilles, but made just three of 18 field-goal attempts and scored 10.

Conley made two 3-pointers and added an assist to start the third quarter as the Jazz opened a 62-52 lead.

Bogdanovic scored five points as the Jazz rebuilt the lead to 10 points. They led by 10 twice more before the Pelicans trimmed the lead to 82-77 at the end of the third quarter.

Rudy Gay made a 3-pointer and Clarkson added a three-point play as Utah increased the lead to 90-79.

Valanciunas answered with a basket, but Mitchell scored 10 straight Jazz points as they grabbed a 100-85 lead.

New Orleans climbed within six, but Bogdanovic made two 3-pointers to push the lead to 111-97 with 1:11 left.

The Pelicans led by six points on five occasions in the first quarter before Gay made two free throws and Clarkson added a 3-pointer to pull the Jazz within 24-23 at the end of the period.

Valanciunas started the second-quarter scoring with a 3-pointer before the score was tied eight times.

Conley made a 3-pointer and Mitchell added a layup before Jones beat the buzzer with a layup that cut Utah’s lead to 52-49 at halftime.