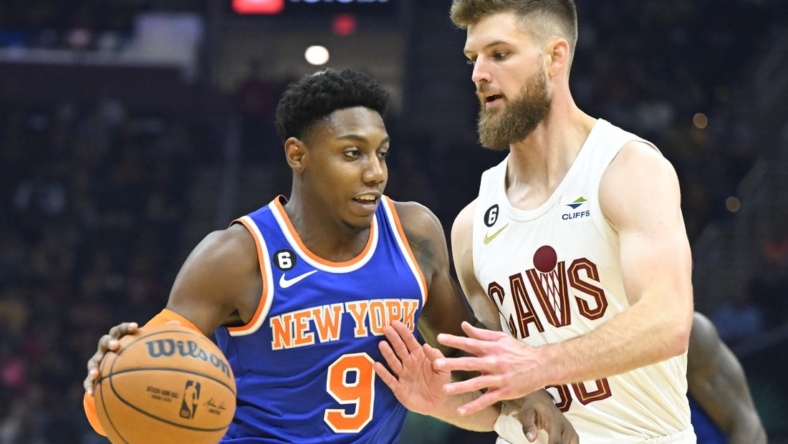 Donovan Mitchell continued his superb start with his new team by totaling 38 points and 12 assists as the host Cleveland Cavaliers heated up down the stretch and rallied for a 121-108 victory over the New York Knicks on Sunday night.

Mitchell, who was rumored to be traded to the Knicks before Cleveland obtained him from Utah Sept. 1, finished with his fifth game of at least 30 points to help the Cavaliers get their fifth straight win.

Mitchell scored 12 points in the final quarter when the Cavaliers outscored the Knicks 37-15 and hit eight 3-pointers after trailing by nine through three quarters.

The New York native made 12 of 20 shots and hit eight 3-pointers to help Cleveland rally down the stretch again after it came back for Friday’s overtime win in Boston.

Jalen Brunson and Evan Fournier led the Knicks with 16 apiece. RJ Barrett and Julius Randle added 15 apiece and Isaiah Hartenstein finished with 12 as the Knicks missed 13 of 20 shots in the fourth and dropped their second straight.

After Cleveland ended a close first half by taking a 62-59 lead, the Knicks outscored Cleveland 20-11 over the final six-plus minutes to take a 93-84 lead into the fourth.

Mitchell started his barrage in the fourth by spinning around Obi Toppin and Hartenstein for a dunk that made it 95-89 with 9:21 left and then converted a four-point play less than two minutes later to forge a 99-99 deadlock.

The Cavaliers never trailed again after Love converted a four-point play for a 104-101 lead with 5:20 left.

Mitchell and Wade hit 3-pointers on consecutive trips to open a 112-101 lead with 3:19 remaining. Mitchell then ended his night with a nifty layup with 46 seconds left before exiting to a standing ovation.