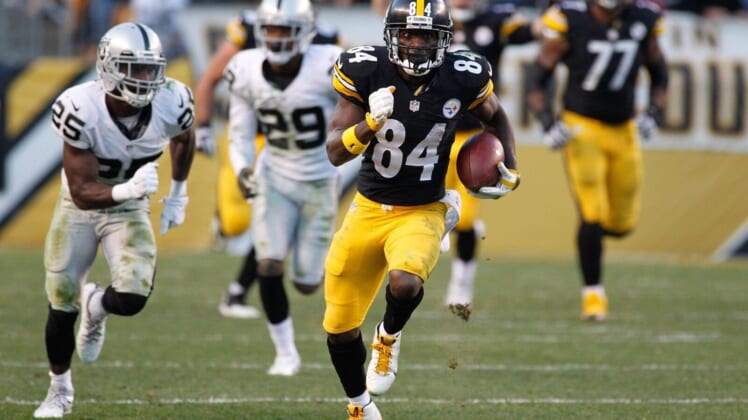 It had been rumored all week and the Raiders have reportedly pulled the trigger acquiring one of the league’s best wide receivers in Antonio Brown.

Unhappy Pittsburgh Steelers wide receiver Antonio Brown was granted his wish for a trade and will be wearing the silver and black in 2019 and beyond.

The seven-time Pro Bowler was shipped west in a trade that reportedly will send the Raiders third and fifth round picks in the 2019 draft to the Steelers for the disgruntled playmaker. In addition, it’s also being reported Brown will receve a new three-year $50 million contract making him the game’s highest-paid wide receiver.

One of the selling points for Brown’s approval of a deal with the Raiders is the team’s impending move to Nevada where there is no income tax.

The Raiders are in dire need of a top-notch wide receiver and Brown fits the bill. Since 2013, Brown has more than 100 receptions each season and has averaged over 1,500 yard per campaign. Many considered 2018 to be an off-year for the unhappy player but he scored a career-high 15 touchdowns for the Steelers.

Antonio Brown will bring his talent to the Raiders.

It’s uncertain how the acquisition of Brown will impact the Raiders plans for a wide receiver-heavy draft in 2019. Even with adding Brown, the Raiders need depth at almost every position on the offensive side of the ball. Current wideouts on the roster include 2018 free agent acquisition Jordy Nelson, veterans Seth Roberts, Keon Hatcher, Dwayne Harris, and 2018 seventh-round draft pick Marcell Ateman. Only Nelson and Roberts have seen significant playing time for the team.

One fan of acquiring Brown is Raiders franchise quarterback Derek Carr. Carr told his hometown Fresno Bee this week he’d be excited to have Brown as a teammate.

“I would imagine he’s definitely in play. I hope he’s in play,” Carr told the newspaper. “It would be great to add a guy like that to your team, talent like that. I don’t know what it’s going to cost. The contract stuff starts getting in the way and they got to figure out numbers and all that kind of stuff. I don’t really like the business side of football, but I just like adding good players to our football team.”

There is a verbal agreement for AB to be traded to the Oakland Raiders, per @AdamSchefter. pic.twitter.com/mYRcfIclbd

Brown’s 104 receptions, 1297 yards, and 15 touchdowns would have led the Raiders last season when the team’s talented tight end Jared Cook led the club with 68 catches for 896 yards and six touchdowns. The team’s top wide receiver was Nelson who hauled in 63 grabs for 739 yards and three scores.