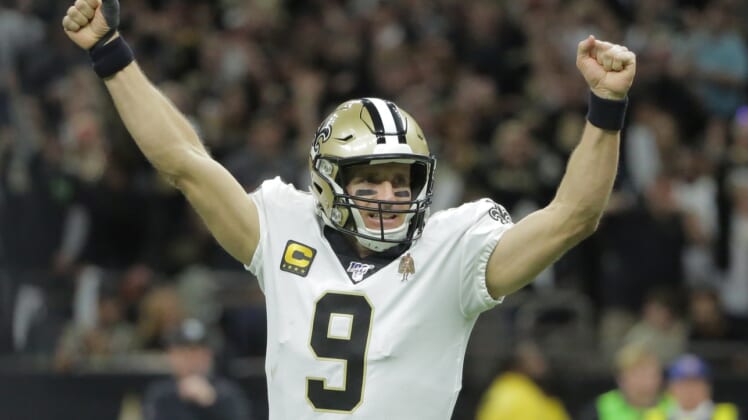 Drew Brees drew significant criticism from around the NFL this week for his controversial comments about kneeling during the national anthem. While the future Hall of Famer has since apologized, President Donald Trump has come to Brees’ defense in a big way.

Donald Trump: Drew Brees ‘should not have taken back’ his stance on kneeling

On Friday, Trump tweeted out a message of support for Brees and his original belief. In the tweet, President Trump shared how highly he regards Brees’ talents as one of the NFL’s greatest quarterbacks ever and said Brees shouldn’t have apologized.

Trump, who has been very critical of athletes who kneel during the national anthem, defended Brees’ original stance that the method of protest is disrespectful to the flag and the military..

While both Brees and Trump encouraged peaceful protests in the United States, they emphasized their personal value for standing during the anthem and paying their respects during the time.

NFL players rip Brees for his comments on national anthem

Brees has since apologized twice for his controversial remarks, posting a written apology and speaking on video. While many of his teammates forgave him after a virtual team meeting, the damage might already be done.

Aaron Rodgers, one of the NFL’s most prominent stars, took a shot at Brees with his own statement defending the right to protest during the national anthem. Hall of Fame safety Ed Reed, a Louisiana native, also blasted the Saints’ star quarterback for his comments.

There could be even bigger problems for Brees in New Orleans. Fans in the city unleashed anti-Brees chants during a protest and there still could be several teammates that are furious with him. Brees will need to win back the trust in the locker room, which might start with listening to the passionate words from Alvin Kamara.