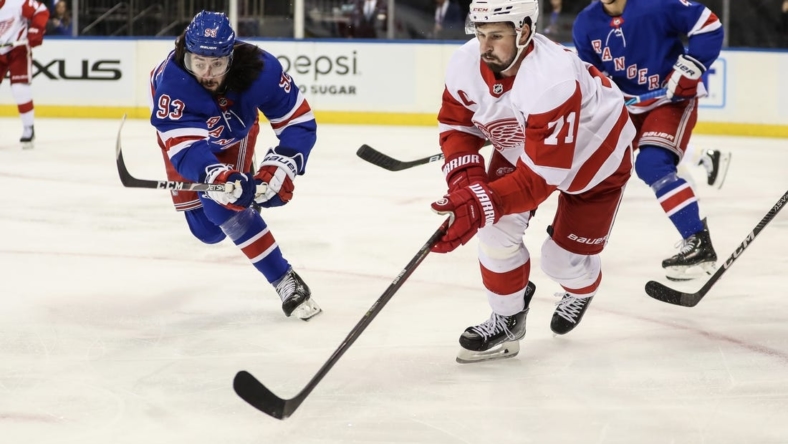 Dominik Kubalik scored a power-play goal with 2:17 remaining in overtime as the visiting Detroit Red Wings rallied for a 3-2 victory over the New York Rangers Sunday night.

Detroit won its third straight when Kubalik waited at the right side of the net for a pass from David Perron and tipped in the puck past goaltender Jaroslav Halak. Officials briefly reviewed the play to see if the Red Wings were offsides and did not change the call, allowing Detroit to end its three-game road losing streak.

Kubalik’s fifth game-winning goal occurred after Perron drew a holding the stick penalty near the neutral zone on New York defenseman K’Andre Miller with 3:16 left. He also scored after Halak denied him on a breakaway with 3:51 remaining in overtime.

Matt Luff and Pius Suter scored in the second period for Detroit, which also beat Washington and the New York Islanders before Sunday.

Kaapo Kakko scored New York’s first goal and Mika Zibanejad tallied on the power play in the opening period but the Rangers fell to 3-3-3 in their past nine games.

Detroit backup Alex Nedeljkovic;made 12 of his 27 saves in overtime when the Rangers changed lines by moving Zibanejad alongside Artemi Panarin and placed Chris Kreider on the fourth line.

Kakko opened the scoring 9:14 in when he swooped in to retrieve a loose puck and lifted it under the crossbar after Kreider’s shot was blocked by Moritz Seider and caromed off the diving Detroit defenseman. Zibanejad doubled the lead nearly eight minutes later by turning Panarin’s cross-ice feed into a one-timer from the left circle.

Luff tipped a blast from Ben Chariot 2:56 into the second after Seider forced a giveaway in the neutral zone. Nearly six minutes later, Suter tied it by lifting a rebound over Halak’s left pad after the Rangers made a poor line change