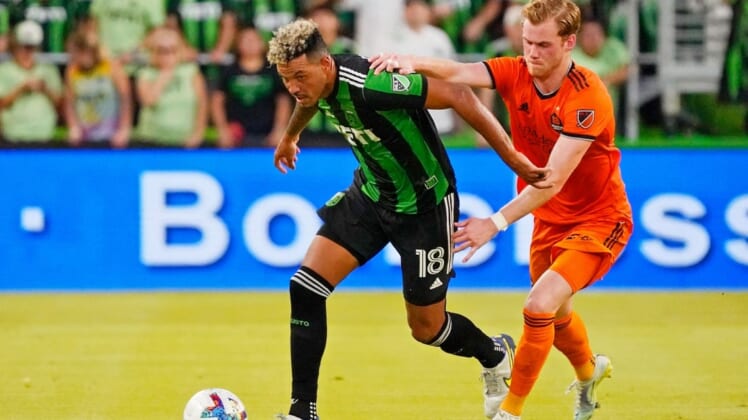 Maximiliano Urruti scored the go-ahead goal off an assist from Sebastian Driussi in the 57th minute as Austin FC dominated the final two-thirds of the match in a 3-1 win over visiting Houston Dynamo FC on Tuesday.

Austin FC (12-4-4, 40 points) won their fourth straight game and has not lost in their last six matches. Austin has taken 16 of a possible 18 points in its past six outings and moved to the top of the Western Conference and Supporters’ Shield standings just 20 games into its second season in MLS.

Urruti’s goal was hit with authority from just outside the box after a flawless pass from Driussi and never gave Houston goalkeeper Steve Clark a chance at a save.

Alex Ring, Austin’s captain, added an insurance goal in the 70th minute when he headed home a dead-on crossing pass to the far post by Ethan Finlay in the run of play. Urruti also booked an assist on Ring’s goal.

Austin has a league-leading 41 goals on the season, six more than in its entire output from its inaugural campaign when it had the fewest in MLS.

Dynamo FC (6-10-4, 22 points) has lost four of their five all-time matches against Austin FC. Houston is winless in its past four matches (one draw).

Adalberto Carrasquilla got the visitors on the board in the 11th minute, outdueling Austin defender Julio Cascante in a pushing match to the left of the goal and getting into the clear to unleash a blistering shot that went through the legs of goalkeeper Brad Stuver. Adam Lundqvist was credited with an assist for making the pass to Carrasquilla that started the scoring play.

The home side promptly answered, with Diego Fagundez converting on a direct free kick in the 15th minute after a foul just outside the box by Houston’s Teenage Hadebe. Fagundez’s right-footed blast beat Clark high to the right side.

Austin was on the attack throughout the second half and never gave the Dynamo a chance to get back into the match.