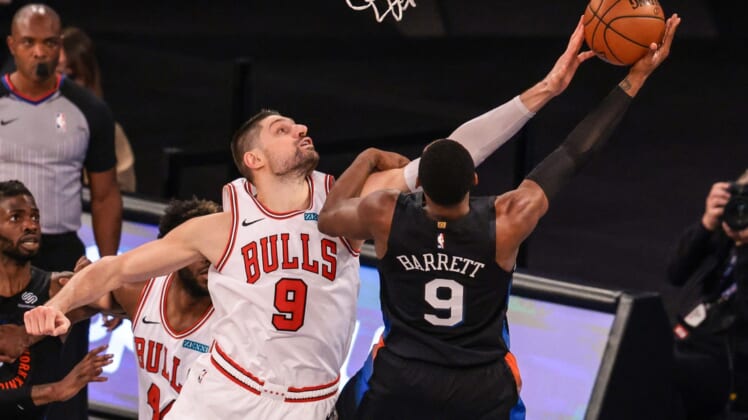 Julius Randle scored 34 points as the host New York Knicks and pulled away in a dominating fourth quarter in a 113-94 victory over the Chicago Bulls Wednesday night.

Randle shot 12 of 23 from the field and posted his 12th 30-point game of the season as the Knicks outscored Chicago 37-19 in the final quarter.

The Knicks gave up the lead briefly on two occasions in the second quarter and were forced to counter numerous Chicago runs after racing out to an 18-point early in the first quarter.

New York won for the 10th time in 11 games and headed out on a six-game trip that begins Sunday in Houston. The Knicks (35-28) moved one game ahead of the fourth-place Atlanta Hawks in the Eastern Conference.

Randle was on the bench when the Knicks began putting the game away. After allowing Chicago to hold two brief one-point leads in the third, Randle’s turnaround 10-footer with 16.2 seconds left gave New York a 76-75 lead heading into the fourth.

Randle returned with 5:36 remaining and the Knicks holding a 93-84 lead and the Knicks finished it off when Reggie Bullock’s 3-pointer made it 102-87 with 3:23 remaining.

RJ Barrett added 22 and rookie Immanuel Quickley scored 11 of his 13 points in the opening minutes of the fourth while Randle sat. Bullock chipped in 13 while Nerlens Noel contributed eight rebounds and five blocks for the Knicks, who shot 46.2 percent.

Nikola Vucevic totaled 26 points and 18 rebounds for the Bulls (26-36), who entered one game behind the 10th-place Washington Wizards for the final play-in spot and were playing the Los Angeles Lakers. Lauri Markkanen added 14 as the Bulls also dropped to 4-4 without Zach LaVine (health and safety protocols).

Randle scored 14 points as the Knicks shot 60 percent and opened a 32-19 lead after the opening quarter. The Knicks settled for a 52-48 lead after getting outscored 14-7 the rest of the half and saw Chicago take a 59-58 lead on a layup by Tomas Satoransky with 7:20 remaining in the third.

Chicago took another brief lead when Markkanen’s 3-point play made it 75-74 with 58.7 seconds left in the third quarter.

The Knicks opened the fourth with an 11-2 run to start pulling away.