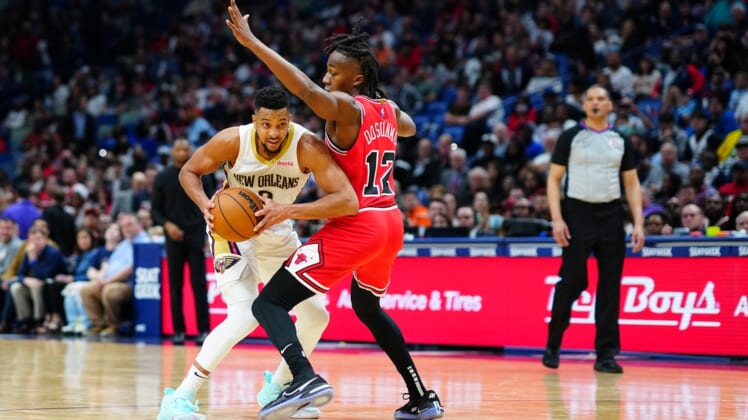 Alvarado had 11 of his 15 points and added two assists during a 21-7 run to start the fourth quarter, helping the Pelicans (31-42) win for the third time in four games. CJ McCollum scored 25 points and Jonas Valanciunas had 16 points and 19 rebounds.

Zach LaVine scored 39 points, Coby White added 23 before fouling out, Nikola Vucevic had 16 and Alex Caruso 11 to lead the Bulls (42-31), who lost for the fifth time in six games and the eighth time in nine road games.

The Pelicans scored the first seven points of the third quarter to take a 70-62 lead.

Javonte Green’s dunk ended a three-minute scoring drought for the Bulls and started an 8-0 run that pulled them even at 70.

LaVine made a basket and a technical free throw to give Chicago a one-point lead before McCollum scored five straight points.

The Bulls regained a one-point lead before Trey Murphy III beat the buzzer with a dunk that gave New Orleans an 86-85 lead going into the fourth quarter.

Chicago pulled even at 90, but Alvarado had seven points, an assist and a steal to lead a 12-0 run by the Pelicans.

In the first quarter, the score was tied four times before LaVine made back-to-back 3-pointers as the Bulls took a 30-21 lead.

The Pelicans trimmed the deficit to five points before LaVine converted a three-point play that gave Chicago a 39-31 lead at the end of the first quarter.

Graham made two 3-pointers and converted a three-point play to help New Orleans pull even at 52.

The Pelicans took a four-point lead twice before White beat the buzzer with a 3-pointer that trimmed New Orleans’ lead to 63-62 at halftime.