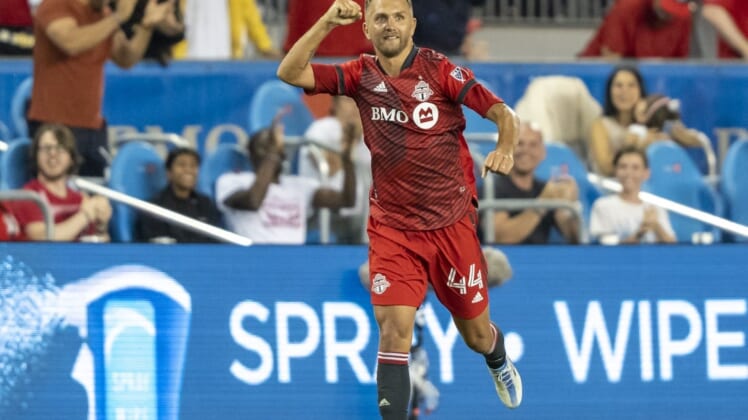 Domenico Criscito’s spectacular left-footed strike in the 75th minute was the equalizer for Toronto FC in a 2-2 draw against the visiting New England Revolution on Wednesday.

After Federico Bernardeschi gave Toronto (8-12-6, 30 points) a lead in the 31st minute, New England jumped ahead with goals from Tommy McNamara and Justin Rennicks on either side of halftime.

That set the stage for Criscito’s late strike. A controversial call gave Toronto a corner kick, which led to Michael Bradley’s pass to Criscito outside the box. Criscito blasted home the highlight-reel goal, his first in eight games since signing with Toronto FC.

Toronto is now 3-0-2 in its last five games. After Toronto FC scored 26 goals in their first 21 games of the season, they have 13 goals during the five-game unbeaten run.

New England (8-7-10, 34 points) has also gone five games without a defeat, winning twice in that span. The Revolution’s attempt at five consecutive shutouts was spoiled by Bernardeschi’s goal, ending the Revs’ goalless streak at 402 minutes — 18 minutes shy of the team record.

Toronto and New England played to a scoreless draw in their other regular-season meeting, on July 30 in Foxborough, Mass.

After defender Christian Makoun fouled Ayo Akinola in the box, Toronto FC received a penalty kick in the 31st minute. Bernardeschi buried the kick for his fourth goal in five games with Toronto.

Rennicks finished a chance three minutes after the halftime break, after Carles Gil sent a sharp pass to an open Rennicks on the right side.