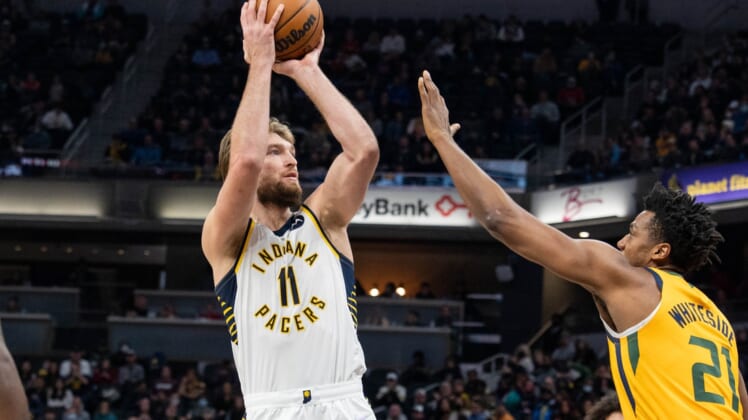 Domantas Sabonis scored a career-high 42 points on 18-of-22 shooting and Lance Stephenson contributed 16 points and 14 assists off the bench to lead the Indiana Pacers to a 125-113 win over the Utah Jazz in Indianapolis on Saturday night.

Sabonis scored 18 points in the first quarter as the Pacers established an early lead en route to snapping a six-game losing streak.

Utah lost for the second straight night, although this game had more of a sense of normalcy than its setback in Toronto on Friday, when eight regular players missed the game due to injuries and COVID-19.

Donovan Mitchell led the Jazz in this one with 36 points on 13-for-27 shooting and chipped in nine assists after missing Friday’s game with a back injury. Bojan Bogdanovic and Jordan Clarkson, both of whom sat out Friday, finished with 21 and 18, respectively.

The Jazz were without Rudy Gobert and Joe Ingles, both of whom are in the NBA’s health and safety protocol.

The Pacers closed out the first quarter on an 18-7 run for a 33-27 lead. Sabonis established himself early by hitting all seven attempts in that period.

Indiana built its lead to 14 before the Jazz responded with a 9-0 run. Bolstered by 56.1 percent shooting, including 52.9 percent from 3-point range, the Pacers took a 61-52 lead into halftime.

Indiana held a 70-57 lead when Mike Conley hit a pull-up jumper to ignite the Jazz. Utah fired off 12 straight points, including 3-pointers by Mitchell and Bogdanovic.

Stephenson, playing for the second time in Indiana after signing a 10-day contract, made a couple of buckets to end Utah’s surge. He received a loud ovation from the home crowd after scoring 30 points on Wednesday.

The Jazz pulled within one point of the Pacers on seven different occasions in the latter part of the third quarter, but Indiana never relinquished the lead.

Utah called a timeout after Sabonis dunked for a 101-95 lead with 6:50 remaining. Mitchell then cut the lead to four, but Holiday fueled an 8-0 Pacers run for a 109-97 advantage.

Utah never got closer than six the rest of the way.