Dolphins’ Ryan Fitzpatrick: It’s time to talk about the ‘elephant in the room’ 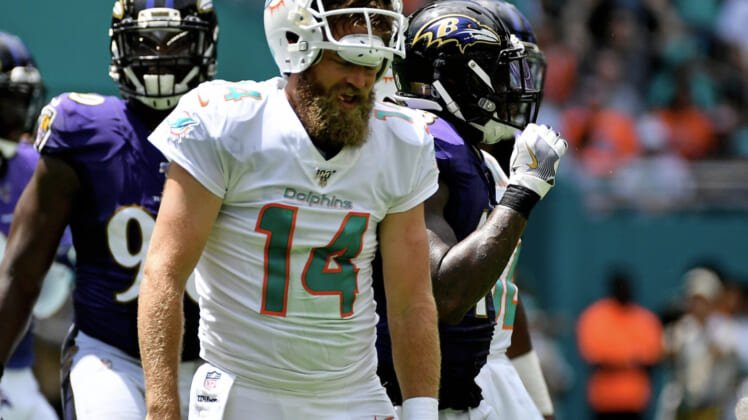 The Miami Dolphins enter their Week 3 game against the Dallas Cowboys as three-touchdown underdogs. They have been outscored 102-10 in their first two games.

We could very well be looking at the worst team in the history of the NFL when all is said and done this season.

The backdrop here includes the trades of Laremy Tunsil, Kenny Stills and Minkah Fitzpatrick over the past few weeks. Things are about to get even uglier for first-year head coach Brian Flores and Co.

In talking about this, veteran quarterback Ryan Fitzpatrick joins his teammates as the adults in the room.

“There’s the elephant in the room,” Fitzpatrick said, via Joe Schad of The Palm Beach Post. “There are certain things, whether it’s the Minkah (Fitzpatrick) trade or Laremy (Tunsil) or Kenny (Stills) or dropping the ball or throwing an interception that some people treat them as taboo, but it’s really — you just have to be open about it and put everything out there.”

This is a perfect take from the Harvard grad. Ignoring a rotten problem is not going to make it go away.

Players currently on the Dolphins’ roster don’t have an incentive to play for the organization. Miami’s brass has made it darn clear that very few players on the 2019 roster will be in South Beach once this rebuild is complete.

How else do you explain trading away recent first-round picks like Tunsil and Minkah before they’ve even hit their prime? Fitzpatrick wants the team to discuss this.

“People think we’re just pawns in a game,” offensive lineman Jesse Davis said. “I think Fitz is right. I think some things do need to be talked about.”

Dolphins players have to be feeling like the organization has abandoned them two games into the season. Heck, Miami traded a franchise left tackle — one of the game’s most important positions — a week before the opener.

It’s not like these players are supportive of what the front office is doing.

“I agree. It’s OK to talk about. It’s happening. They make decisions. The higher-ups make decisions and we have to live with them,” cornerback Bobby McCain added. “At the end of the day we have who we have. And we’ve got who we’ve got.”

That’s the issue. There’s an obvious split between players who are asked to risk their health on the field and a brass sitting in luxury suites and the owner’s box.

The longer this goes untalked about internally, the more embarrassing the on-field product promises to get.