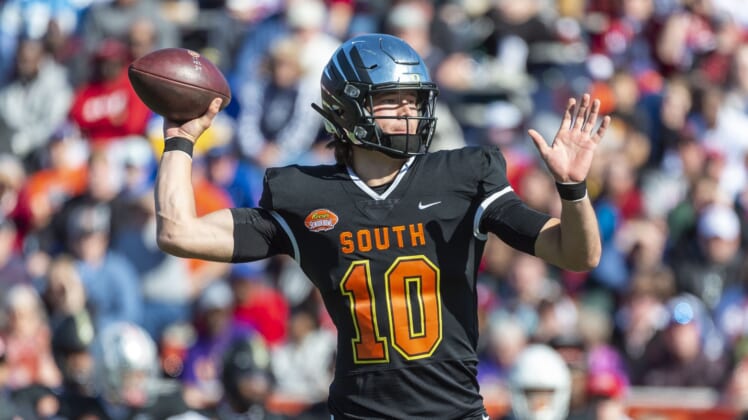 It has seemingly been a foregone conclusion for longer than the past calendar year that the Miami Dolphins were going to do everything possible to draft Alabama quarterback Tua Tagovailoa come April.

Miami went into full-scale tank mode early last season, trading off former first-round picks Laremy Tunsil and Minkah Fitzpatrick. The goal was to acquire a high pick and select Tua to be the face of the franchise in South Beach.

According to longtime Dolphins beat writer Armando Salguero of the Miami Herald, that might not be the case. In fact, the Fins could be higher on former Oregon signal caller Justin Herbert.

“Firstly, the club’s view of Alabama quarterback Tua Tagovailoa is not of a slam-dunk pick near the top the draft. At least not yet,” Salguero reported. “Secondly, the club has an increasingly positive view of Oregon quarterback Justin Herbert.”

The report notes that the Dolphins are worried about Tagovailoa‘s medicals. Not only are they concerned about him recovering from the hip injury he suffered with the Crimson Tide last season, multiple ankle injuries in college are of a concern.

Even then, Miami’s not-so-subtle interest in Tagovailoa has not necessarily been kept private. This could obviously be a way of the Dolphins playing the PR spin game ahead of the 2020 NFL Draft.

Tua seems to be progressing at a rapid clip ahead of the NFL Scouting Combine and Alabama’s Pro Day.

Selecting No. 5 overall, the Dolphins have been linked to multiple trade-up scenarios. In fact, they are said to be interested in moving up to No. 2 overall. Leaking this could be a way to potentially lower the cost in any trade.