Dolphins GM: We have ‘more than enough’ ammo to trade up for the ‘right’ quarterback 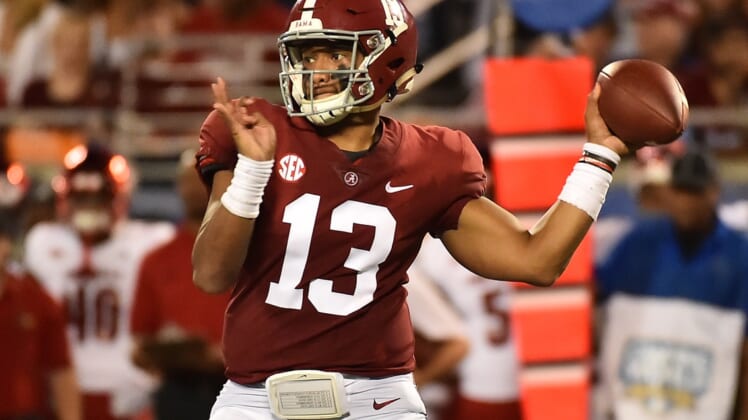 The Miami Dolphins have been reportedly looking at trading up in the draft so they can land the quarterback they covet, which has long been rumored to be Tua Tagovailoa.

On Wednesday at Senior Bowl practices, Dolphins general manager Chris Grier did not dispute that his team would be interested in moving up if that’s what it takes to land “the right guy” to lead the organization. He said the Dolphins have “more than enough” draft capital to trade up for such a player.

“We’d like to find the right guy to be the quarterback,” Grier said, via Adam Beasley of the Miami Herald. “You see how important it is around the league. So, I wouldn’t just say it’s (owner) Steve (Ross). It’s Brian (Flores). Myself. Coaching staff. Scouts. We think it’s important that we find the right guy, and the leader, to be the quarterback here for a long time.”

Grier also said that the Dolphins haven’t met Tagovailoa yet and that the evaluation process is still in its infancy stages.

“I’d say we’re still so early in this process,” Grier said. “We haven’t met him, we haven’t sat down with him, talked with him. Our doctors haven’t seen him. We know as much as you do right now. We see the media reports and things of that nature. At the end of the day, we’ve got to get the know the guy, get in front of him, just like any player. We’re very, very early in the stage in the fact that we haven’t even met the guy yet.”

Tagovailoa, of course, suffered a season-ending hip injury that required surgery. However, he’s expected to make a full recovery, to begin throwing this spring and plans on being fully healthy so he can work out for teams ahead of the 2020 NFL Draft.

Assuming he continues to make remarkable strides in his recovery, Tagovailoa is primed to be a very high draft pick. Reportedly, Miami would move all the way up to No. 2 overall to land him this coming April.