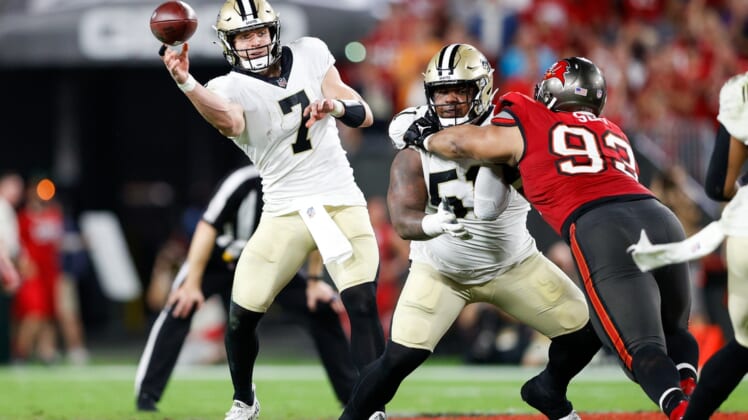 The Miami Dolphins might be catching another lucky break.

Miami (7-7), which will visit the New Orleans Saints (7-7) on Monday night, is on a six-game winning streak, including a 31-24 victory over the New York Jets on Sunday. The Dolphins have the second-longest active win streak in the NFL, trailing only the Kansas City Chiefs (seven).

The Dolphins, however, have played a soft schedule during this run, beating only one team with a winning record — the 8-6 Baltimore Ravens. Every other Dolphins opponent during the streak already has clinched a losing record for the season.

On Monday night, the Dolphins likely will face quarterback Ian Book, a fourth-round rookie out of Notre Dame who would make his NFL debut.

If Book gets the call, he would become the fifth Saints starting quarterback this calendar year, a run that began with Drew Brees in January, before his retirement. Jameis Winston began the 2021 season as the starter before he suffered a season-ending knee injury on Halloween.

That leads the Saints to Book, who went 30-5 at Notre Dame, setting a school record for most wins by a starting QB.

“He’s a sharp kid,” Saints quarterback coach Ronald Curry said of Book, 23. “He’s a fast learner and a film junkie. He doesn’t make the same mistake twice, and I love working with him.”

Then again, Book struggled against top opponents at Notre Dame, and he would face a Dolphins defense that loves to bring exotic blitzes.

Dolphins cornerback Xavien Howard, who this week was named to his third Pro Bowl, is the player most likely to victimize Book. Howard has intercepted 22 passes in his past 46 games, an impressive pace.

Other Dolphins defenders to watch include rookie Jaelan Phillips, who leads the team with 8 1/2 sacks; linebacker Jerome Baker, who has a team-high 73 tackles; and safety Eric Rowe (team-high three forced fumbles).

Over the past seven weeks, Miami ranks second in the NFL in fewest yards allowed.

Offensively, the Dolphins are led by second-year quarterback Tua Tagovailoa, who has completed 69.9 percent of his passes this season.

Rookie wide receiver Jaylen Waddle, who leads Miami with 86 catches and 849 receiving yards, is back from the COVID list this week.

Dolphins coach Brian Flores said he has confidence in his team.

“It’s a great group to coach,” Flores said. “They support each other.”

Miami hopes to become the first NFL team to finish with a winning record in the same year they started 1-7.

Dolphins rookie safety Jevon Holland, on the COVID list last week, is back at practice after clearing protocols. He has made numerous big plays for the Dolphins, including two interceptions and two sacks.

The Saints, though, are in a precarious position. Besides a potential novice starter at QB, New Orleans’ two starting offensive tackles — Terron Armstead and Ryan Ramczyk — are questionable due to knee injuries.

Running back Alvin Kamara is the Saints’ primary threat. In just 10 games this season, he has gained 1,016 yards and scored eight touchdowns from scrimmage this year.

The Saints also will rely on their defense; they are coming off a 9-0 win Sunday over the Tampa Bay Buccaneers, becoming the first team to blank Tom Brady in 15 years.

Offensively, the Saints — who have been without coach Sean Payton since last Friday due to COVID protocols — have struggled. The Saints rank last in the NFL in completion percentage (57.4).

Now they’re set to play a hot defense, all while potentially starting a quarterback making his NFL debut.