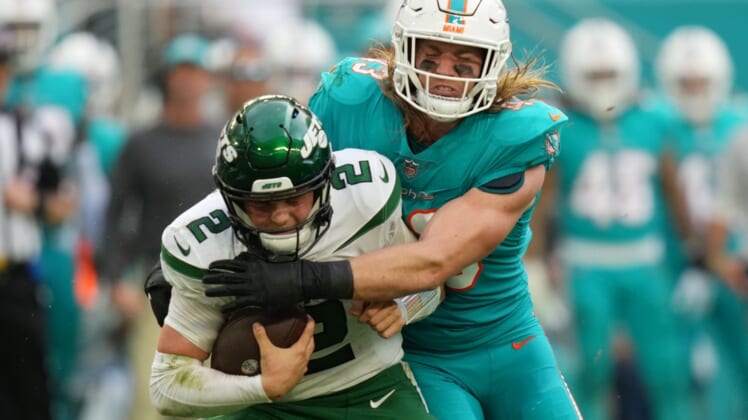 Tua Tagovailoa, making up for a pick-six moments earlier, threw an 11-yard touchdown pass to DeVante Parker with 3:37 left in the game, leading the Miami Dolphins to a 31-24 win over the visiting New York Jets on Sunday.

Miami (7-7) won its sixth straight game, thanks in large part to Duke Johnson, who rushed for 107 yards and the second two-touchdown game of his seven-year NFL career.

Johnson, a hometown hero with the Miami Hurricanes but playing just his second game with the Dolphins, had been out of football for more than one month earlier this season and only got the start because two Dolphins running backs were in COVID-19 protocol earlier in the week.

Jets rookie quarterback Zach Wilson completed 13 of 23 passes for 170 yards, but he was sacked six times and lost one fumble as New York (3-11) lost its third straight game.

Dolphins quarterback Tua Tagovailoa completed 16 of 27 passes for 196 yards, two touchdowns and two interceptions, including one for a score.

Jets safety Elijah Riley left the field on a stretcher and a spine board. He has a neck injury.

New York had been the only NFL team that had never led by at least 10 points at any point this season.

But that changed in Sunday’s first quarter as the Jets got Wilson’s 2-yard touchdown pass to Braxton Berrios and a 27-yard field goal from Eddy Pineiro. Berrios is an ex-Hurricane, and Pineiro is a Miami native.

The touchdown drive went 83 yards as Wilson went 5 for 5. That ended a streak by Miami’s defense, which had not allowed a TD in 24 consecutive drives.

The field goal was set up when a Tagovailoa pass sailed high and was intercepted by Ashtyn Davis, who returned it to Miami’s 25-yard line.

Miami, after gaining just seven yards on their three possessions, scored a touchdown on their fourth try, getting a 1-yard Johnson run.

But the Jets answered immediately with a 74-yard drive that ended with Wilson’s 1-yard QB sneak.

Miami tied the score 17-17 on its first possession of the third quarter, getting Johnson’s 6-yard run.

Tagovailoa’s one-yard pass to 310-pound defensive tackle Christian Wilkins with 14:23 left in the fourth gave Miami its first lead of the game at 24-17.

With 7:51 left in the fourth, Jets rookie cornerback Brandin Echols tied the score on his 20-yard interception return.

But Tagovailoa’s next big throw, the TD to Parker, proved too much for the Jets.