Dec 26, 2020; Paradise, Nevada, USA; Miami Dolphins outside linebacker Elandon Roberts (44) is taken off the field with an injury in the second half against the Las Vegas Raiders at Allegiant Stadium. The Dolphins defeated the Raiders 26-25. Mandatory Credit: Kirby Lee-USA TODAY Sports

Both were in pads for Thursday’s practice.

Williams, 24, started seven of Miami’s first eight games last season before landing on injured reserve with a foot injury suffered in a Nov. 8 victory against the Arizona Cardinals. He also spent time on the reserve/COVID-19 list earlier this summer. 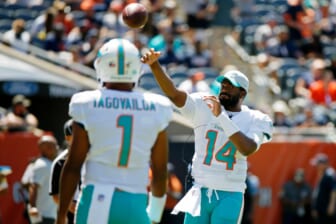 Roberts, 27, started 11 of his 13 games in 2020, his first season with the Dolphins, before sustaining a season-ending knee injury during a Dec. 26 win against the Las Vegas Raiders.