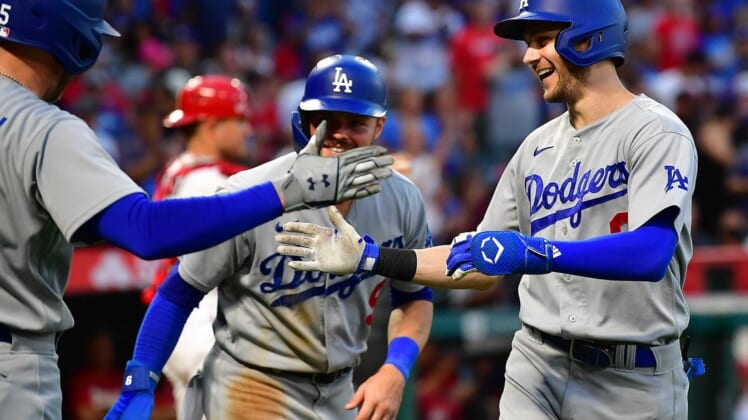 Dodgers starter Julio Urias (8-6) gave up five hits including a solo homer to Brandon Marsh in seven innings of work to earn the victory. He struck out eight and did not issue a walk while hurling 91 pitches.

The Dodgers took control of the game with a five-run third inning. The first two runs came in on Turner’s second homer of the game, and the next three scored on Muncy’s homer.

Freeman also doubled for the Dodgers, who completed a two-game sweep and are heading into the All-Star break with the best record in the National League.

The Dodgers finished Saturday’s game with just seven hits, but five of them went for extra bases.

The Angels offense also totaled seven hits, but did not manage to score until the seventh inning, when Marsh homered. Luis Rengifo and Shohei Ohtani each had two hits for the Angels, who have dropped eight of their last nine games.

Turner got the Dodgers started with one out in the first inning, hitting the first pitch he saw from Suarez — a 77-mph curveball — into the center-field seats for his 13th homer of the season.

It remained 1-0 until Turner came to the plate again in the third with one on and one out. This time he got ahold of a fastball for a two-run homer, his 14th of the year, to give the Dodgers the 3-0 edge.

A double by Freeman and a walk by Justin Turner preceded Muncy’s three-run homer later in the frame that made it 6-0.

Freeman’s leadoff homer in the fifth increased the Dodgers’ lead to 7-0.