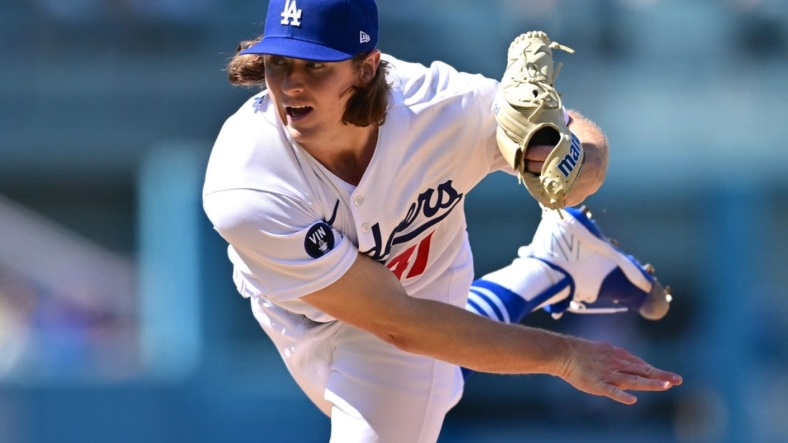 Trying to strike a balance of playing hard through the finish line while staying cognizant of the upcoming playoffs, the Los Angeles Dodgers will make an adjustment to their pitching staff on Sunday.

Rookie Ryan Pepiot will be recalled and is expected to pitch the bulk of the innings against the visiting San Diego Padres, although left-hander Caleb Ferguson actually will start the game as an opener.

Scheduled Dodgers starter Andrew Heaney will be pushed back a game, as will everybody else in the rotation in order to give the staff an extra day of rest.

The Dodgers have been dominating all season but after a recent hiccup when they lost three consecutive games, they ended that downturn with a resounding 12-1 victory over the Padres on Saturday. Starter Julio Urias dominated over six innings and Mookie Betts set a career high with his 33rd home run.

Pepiot (2-0, 4.02 ERA) was just optioned to Triple-A Oklahoma City on Aug. 22 but can return before 15 days only as an injury replacement on the roster. The Dodgers are expected to place left-hander David Price on the injured list Sunday with wrist inflammation.

Pepiot’s most recent outing on Aug. 21 against the Miami Marlins was the longest of his seven starts in the big leagues. He went six innings, giving up two runs on four hits while earning his first win since July 5.

In another personnel adjustment, the Dodgers had Betts start at second base Saturday, the third time he has started there this season and the ninth time since he joined the Dodgers in 2020. He not only hit a home run, he had a first-inning triple and scored three runs.

“Being able to play second base is kind of something I have been doing my whole life,” Betts said. “Getting to go back there is something that is really, really fun for me personally. I really do enjoy it. But they pay me to catch these fly balls.”

Sand Dodgers manager Dave Roberts: “For him it’s the mind, where running out there and playing a different position makes it fun for him.”

The Padres will turn to right-hander Mike Clevinger (5-5, 3.59) on Sunday. His worst outing of the season came last month at Dodger Stadium when he gave up a season-high five runs over 4 2/3 innings in an 8-3 Padres defeat.

Clevinger has won two of his four starts since and is coming off a win Monday against the San Francisco Giants when he gave up two runs on five hits over five innings.

While the Dodgers are expected to celebrate a National League West title soon, the Padres continue to fight for position in the wild-card chase. They enter Sunday with the second of the three NL wild-card spots.

Brandon Drury was not in the Padres’ lineup Saturday after he was hit by a pitch Friday in the flap that extends off his helmet and over his face. He went through a workout Saturday.

“We’ll see (Sunday) but we’re day-to-day with him,” Padres manager Bob Melvin said. “I think he was getting better as the night went along, which was a good thing. But we’ll see if he is available (Sunday). We’re not really sure.”