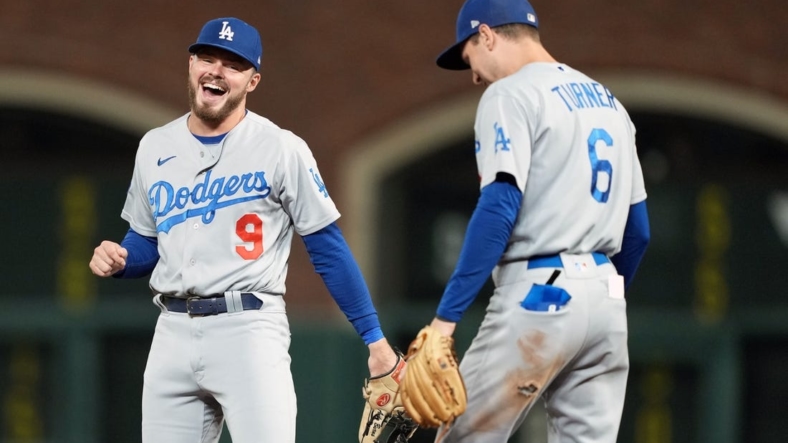 Trayce Thompson blasted a home run down the street from where his brother, Klay, won an NBA title in June, helping the Dodgers (100-44) record win No. 100 faster than any previous team in franchise history.

The previous Dodgers record of 100 wins in 147 games was set by the 1953 club in Brooklyn en route to a World Series defeat at the hands of the New York Yankees.

Turner got his big night going with a one-out single in the second inning, after which Thompson belted his 11th homer to give Los Angeles the lead for good at 2-1.

The home run came off Giants reliever Sean Hjelle (0-2), who came on after opener John Brebbia had pitched a scoreless first.

In between, the Giants had opened the scoring in the last of the first on an RBI infield out by J.D. Davis, chasing home Thairo Estrada, who had led off the inning with a single.

The Dodgers broke the game open in the third on run-scoring singles by Freddie Freeman, Max Muncy and Turner, and an RBI grounder by Joey Gallo, taking a 6-1 lead.

After giving up five straight hits and a walk with no outs in the inning, Hjelle was pulled, charged with six runs on eight hits in one-plus inning. He walked one and did not record a strikeout.

Turner added a run-scoring single in the fourth to cap a 3-for-4 night with two RBIs and complete the Dodgers’ scoring.

Urias (17-7) cruised through his six innings, allowing two runs (one earned) and five hits. He walked one and struck out eight.

The Giants’ only other run came in the third on a solo homer by Wilmer Flores, his 19th of the season.

Trea Turner had two hits and scored twice, while Freeman and Will Smith added two hits apiece for the Dodgers, who outhit the Giants 13-5.

Brandon Crawford went 2-for-4 for the Giants (69-76), who have dropped three of four following a three-game winning streak.