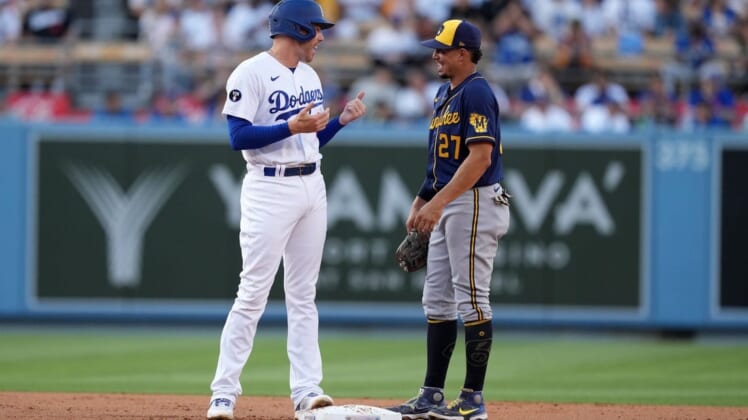 Joey Gallo’s revival continued with a two-run double and Andrew Heaney struck out 10 over six innings as the Los Angeles Dodgers finished off a 12-6 victory Wednesday over the visiting Milwaukee Brewers.

Cody Bellinger and Austin Barnes combined to drive in six runs in the bottom two spots of the order as the Dodgers won for the 18th time in 22 games this month. The Dodgers won the season series 4-3 over the Brewers.

Willy Adames and Hunter Renfroe hit home runs for the Brewers, with Adrian Houser (4-9) giving up five runs in just 2 1/3 innings in his return from the injured list. Milwaukee fell to 5-8 since Aug. 12.

Since the Dodgers acquired a struggling Gallo from the New York Yankees at the trade deadline, he has six extra-base hits and seven RBIs in 14 games after getting 24 RBIs in 82 games with New York.

Heaney (2-1) gave up two runs on four hits and a walk as he went at least five innings for the first time in six starts since returning from his second stint on the injured list because of a shoulder strain.

Adames’ home run in the first inning, his 25th, gave the Brewers the early 1-0 lead. The Dodgers took over in the bottom of the first when Freddie Freeman and Justin Turner had RBI singles and Bellinger hit a two-run double for a 4-1 lead.

The Brewers got a run back in the third on Renfroe’s RBI double, with the Dodgers answering again in the same inning on an RBI groundout from Barnes for a 5-2 advantage.

The Dodgers added four more runs in the fourth on a sacrifice fly from Max Muncy, Galllo’s two-run double and an RBI single from Barnes. Muncy had another sacrifice fly for a run in the fifth as the Dodgers led 10-2.

Barnes added a two-run home run in the sixth, his sixth of the season. Adames had a two-run double for the Brewers in the seventh.

Both teams finished with a position player on the mound for the second consecutive game. Milwaukee infielder Pablo Reyes pitched a scoreless eighth, and Dodgers infielder Hanser Alberto gave up a two-run home run to Renfroe in the ninth, his 23rd.