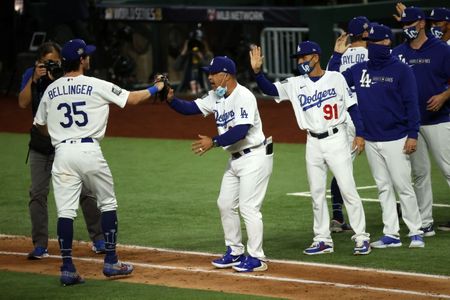 Los Angeles Dodgers rookie right-hander Tony Gonsolin, who has a 9.95 ERA through two career postseason appearances, will start Game 2 of the World Series on Wednesday.

Dodgers manager Dave Roberts made the announcement late Tuesday night after his team won the series opener 8-3 in Arlington, Texas.

Gonsolin enters the Game 2 appearance with just two days of rest after a poor outing Sunday in Game 7 of the National League Championship Series against the Atlanta Braves. He lasted two-plus innings and gave up two runs on two hits and three walks with one strikeout, but the Dodgers went on to win 4-3.

Right-hander Dustin May and left-hander Julio Urias, who also pitched Sunday, will be available for relief duty Wednesday, Roberts said.

Right-hander Walker Buehler, who fired six shutout innings to beat the Braves in Game 6 on Saturday, is scheduled to start Game 3. The Dodgers’ pitching plans for Game 4 are uncertain.

In Gonsolin’s only other postseason outing, he started Game 2 of the NLCS, and the Braves tagged him for five runs on three hits in 4 1/3 innings. He walked three, struck out seven and was the losing pitcher as Atlanta prevailed 8-7.

The Rays had not confirmed their rotation plans beyond Game 2.