Dodgers pull out victory over Marlins in 10th inning 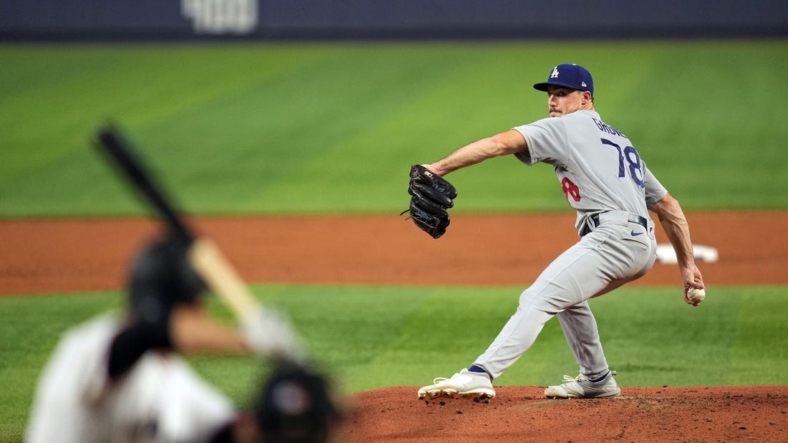 Freddie Freeman hit an RBI groundout in the top of the 10th inning, and Chris Martin worked out of a bases-loaded jam in the bottom of the frame, leading the Los Angeles Dodgers to a 3-2 win over the host Miami Marlins on Monday night.

After Miami loaded the bases with one out in the 10th, the Dodgers pulled closer Craig Kimbrel. Martin earned his first save of the year by striking out Garrett Cooper looking at a high fastball and then getting Jacob Stallings on a pop fly.

Los Angeles was also led by Will Smith, who hit his 19th homer of the season, a two-run shot.

Prior to the game, the Dodgers scratched Cy Young Award candidate Tony Gonsolin, placing him on the injured list due to a strained right forearm. Gonsolin, who is 16-1 and leads the National League in ERA (2.10) and win percentage, said he felt tightness since his previous start.

The Dodgers mostly rested center fielder Mookie Betts, who in the first three games of this series went 8-for-15 with four homers, two doubles and six RBIs. Betts was used as a defensive reserve in the 10th inning.

Michael Grove made the start for Gonsolin, allowing five hits, one walk and two runs in 4 2/3 innings. Grove, in just his fourth major league appearance, got a no-decision.

Marlins starter Pablo Lopez also got a no-decision. He allowed five hits, three walks and two runs in six innings, striking out six batters, including three in the sixth.

Miami opened the scoring in the first inning as Joey Wendle doubled, advanced on Jon Berti’s fly out and scored on Brian Anderson’s groundout.

Los Angeles went up 2-1 in the third as Freeman singled and Smith followed with his 415-foot homer to center.

Miami tied the score 2-2 in the fourth. Cooper tripled and he scored on Lewin Diaz’s bloop single that fell behind over-shifted shortstop Trea Turner and in front of center fielder Cody Bellinger. On the play, Turner stopped sprinting, apparently believing Bellinger would be there.

The Marlins threatened in the sixth as Diaz hit a leadoff double. Pinch-runner Luke Williams advanced to third on Charles Leblanc’s broken-bat grounder to shortstop. Williams had to hurdle both the splintered bat and the ball to get to third. From there, Williams was stranded by Jerar Encarnacion’s groundout and Wendle’s strikeout.

In the top of the 10th, ghost runner Bellinger advanced on Turner’s check-swing infield roller and scored on Freeman’s grounder.